[THE LAST OF ROBIN HOOD opens in Cleveland on Friday September 5th at the Cedar Lee Theatre and the Capitol Theatre.] 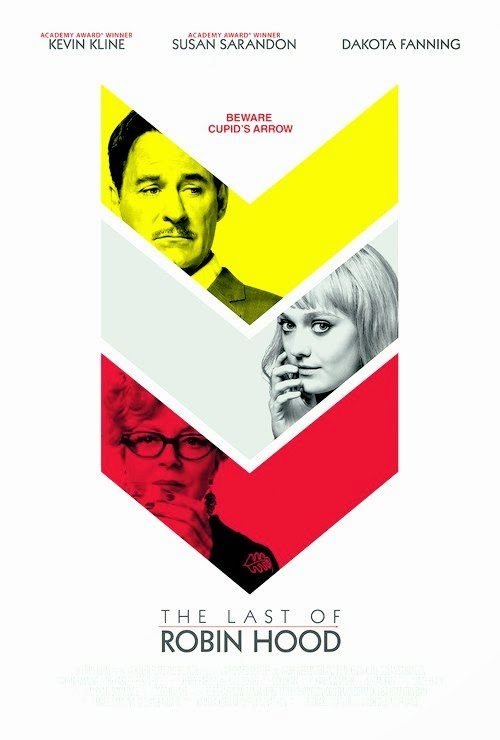 It's doubtful there was a need for a film about Errol Flynn's late in life fling with teenage aspiring actress Beverly Aadland, but nonetheless we have just that in THE LAST OF ROBIN HOOD. As the film starts, Flynn (Kevin Kline) is already dead and Beverly (Dakota Fanning) is being bombarded with questions from reporters. The pressure proves to much, and the young girl faints. Or is it all a staged performance orchestrated by Beverly's mother, Florence (Susan Sarandon)? Perhaps flashing back in time will shed some light.

And so we see how the two lovers meet, Flynn living up to his infamous reputation of being “in like Flynn” almost immediately. Beverly is sure that she won't hear from the famous actor again now that he's gotten what he wants, but it appears the aging satyr has genuine feelings for the young girl. Even when he learns that Beverly is underage and could conceivably ruin him with a statutory rape charge, he continues the romance, even going so far as to ingratiate himself with Beverly's mother. Florence makes token efforts at protecting her daughter's virtue, but ultimately seems more concerned with how the relationship can advance Beverly's career. But is Beverly herself just a gold digger, or are her feelings for Flynn genuine?

One hates to judge a film by its distributor, but the fact that THE LAST OF ROBIN HOOD comes under the Lifetime films banner pretty much tells you all you need to know. It's a lightweight love story set against the backdrop of classic Hollywood in which we see, for the umpteenth time, that show business is a dirty business, and the media can be ruthless muckrakers who will gladly ruin the lives of the wicked and the decent alike if it will sell a few more papers. Kline displays considerable wit and charm as Flynn, and Sarandon even manages to create some sympathy as Beverly's boozy and manipulative mom. Whether it's Fanning's performance, the writing, or a bit of both, though, Beverly comes across as bland and uninteresting, not exactly qualities you want in a main character. 2 out of 4 stars.
Posted by Bob Ignizio at 12:00 AM