The Last Days (now on video) 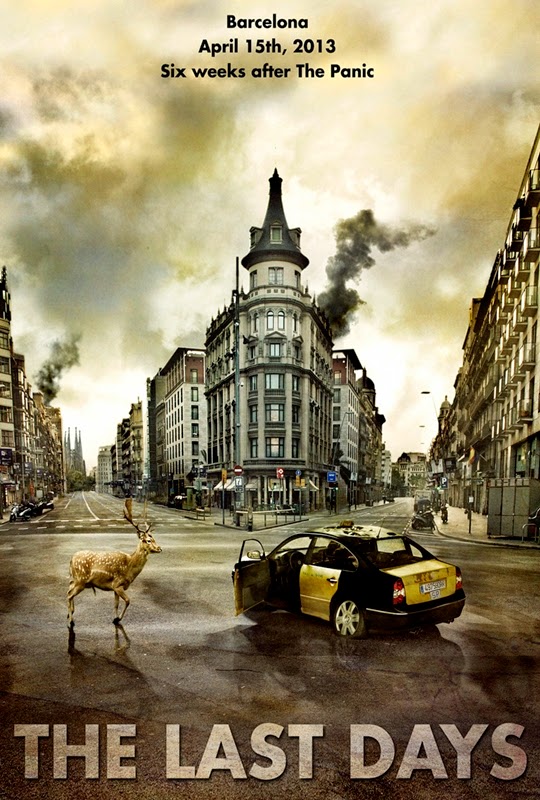 Even if you leave out all the one with zombies in them, there have still been about a bazillion movies made in the last 10 years or so about the end of the world. All the popular methods of destruction are well represented – global warming, global cooling, plagues, Mayan prophecies, dirty bombs, the Rapture, rougue planets crashing into our orbit. Trying to find a fresh twist on the genre that isn't completely ridiculous is no easy task. So kudos to THE LAST DAYS (original title Los Ultimos Dias) for not only coming up with a nifty new way to wipe out humanity, but putting that idea into a pretty good movie, to boot.

The premise is that, for some unknown reason, human beings have become afflicted by incredibly intense agoraphobia (that's the fear of going outside, for those of you not up on your phobias). I mean really intense, as in having a heart attack and dying only a few seconds after stepping outside. Our window into this world is a pair of office workers. Enrique (José Coronado), we learn in flashbacks, was an efficiency expert hired to lay off many of the employees just prior to things going south. Mark (Quim Gutiérrez) was a computer programmer on the chopping list. Now the two must work together as they traverse the city sewer system hoping to find their loved ones trapped in other locations.

There may not be any zombies in THE LAST DAYS, but the influence of George Romero is very much apparent nonetheless. For example, there are conflicting and ultimately irrelevant attempts by the experts to explain the origins of the phenomena ala the Venus space probe in NIGHT OF THE LIVING DEAD. Society breaks down in a very Romero-esque fashion – one group even holes up in a shopping mall, an obvious nod to DAWN OF THE DEAD. There are other examples, but because they're all integrated so well into a film that ultimately has a strong identity of its own, it never feels like “wink, wink/nudge nudge” homage, let alone an outright rip-off.

Also like Romero, co-writers and directors David and Alex Pastor make a conscious choice to have their movie be about something beyond the surface drama. Just as the zombies in DAWN OF THE DEAD represented consumerism run rampant, the agoraphobics in THE LAST DAYS represent our present day culture where everyone keeps to themselves, spending more time in front of one kind of screen or another than actually interacting with other people or the outside world.

The film does falter a bit in the end, offering a conclusion that is perhaps a bit too pat. There's actually a perfect spot for the film to have stopped about five minutes sooner that would have still gotten the message across without hammering it home, and one can't help but wish the film had ended there. Still, up to that point this is an engrossing story well told, and about the only reason this went straight to home video rather than getting a U.S. theatrical release is that it's in Spanish with subtitles. 3 out of 4 stars.