The German Doctor (September 6th and 7th at the Cleveland Cinematheque)

[THE GERMAN DOCTOR screens Saturday September 6th at 9:45 pm and Sunday September 7th at 4:15 pm at the Cleveland Cinematheque.] 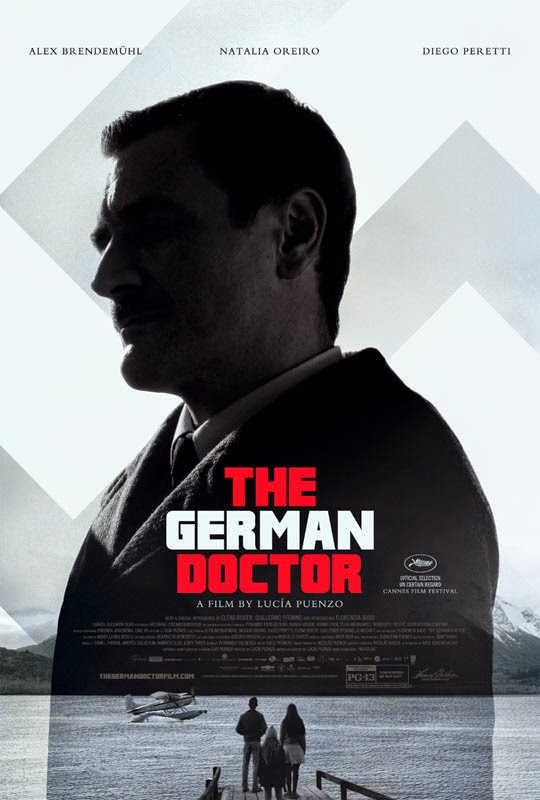 As anyone who ever saw THE BOYS FROM BRAZIL or THEY SAVED HITLER'S BRAIN can tell you, after World War II a number of high ranking Nazis found sanctuary in South America. The part where they cloned the Fuhrer and/or kept his brain alive in a jar might be suspect, but there's no getting around the fact that Argentina in particular was willing to take in even the most heinous Nazi war criminals. Case in point, Dr. Josef Mengela, aka “The Angel of Death”, who was known for conducting unconscionable experiments upon prisoners at the German concentration camp at Auschwitz.

In THE GERMAN DOCTOR it's 1960 and Mengele (Àlex Brendemühl) is recently arrived in Argentina. While trying to find his safe house he asks directions from a German/Argentine family who happen to be going the same way. Patriarch Enzo (Diego Peretti) offers to let the Doctor follow him, but before they get very far a rainstorm forces everyone to take shelter in a barn. While there, twelve year old Lilith (Florencia Bado) quickly takes an interest in the Doctor, and vice versa. The next day it becomes clear that the hotel Lilith's family will be taking over is quite close to the house Mengele is staying at. Finding accommodations at the hotel more to his liking, the bad Doctor decides to stay there instead.

While her family works to get the hotel up and running, Lilith starts school at an all-German academy. The other students there treat her badly, making fun of her for her short stature. This is something the Doctor claims he can help with, convincing Lili's mother Eva (Natalia Oreiro) to subject the girl to highly dubious treatments. Mengele is also very interested in Eva's pregnancy: she is expecting twins, and as anyone familiar with Mengele's interest in twins knows, that was an area of particularly unhealthy interest of his.

Writer/director Lucía Puenzo, who also wrote the novel it's based on, builds tension and suspense in an almost Hitchcockian fashion. The resulting film is accessible in a classic Hollywood kind of way, and unless you're the kind of person who simply refuses to watch movies with subtitles it's hard not to get pulled in. The cast is top notch, too, with Brendemühl especially doing a good job at conveying both menace and something that at least seems like kindness towards his young admirer, a characteristic many noted about Mengele in real life. Which makes it all the more frustrating when THE GERMAN DOCTOR just kind of fizzles out at the end.

Since Puenzo isn't rewriting history ala Quentin Tarantino's INGLORIOUS BASTERDS, it's not like one could expect Mengele to get his comeuppance. In real life, all indications are that he never really did. But given that the film sets up an expectation of some kind of dramatic resolution more in tune with a thriller, it seems a misstep not to offer something more exciting and satisfying than the conclusion we get. Then again, maybe that's the point. Certainly those who wanted the real life Mengele to face trial for his crimes weren't satisfied, either.

The film is also a coming of age story for Lili, and in that respect proves more successful. It's easy to relate to the awkward young girl latching on to the seemingly kind Doctor. But where Puenzo's main interest seems to lie is in using Lili as a metaphor for Argentina itself, a way to try and make sense of how how her home country could have given sanctuary to monsters like Mengele, and the effects doing so had on the soul of the country. That's all interesting stuff worthy of being addressed in a film, but it doesn't change the fact that audiences will likely be left wanting when the end credits roll. 2 ½ out of 4 stars.
Posted by Bob Ignizio at 12:00 AM