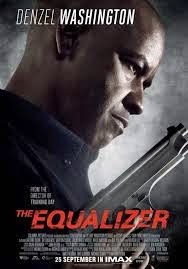 THE EQUALIZER begins with a Mark Twain quote that reads, “The two most important days in your life are the day you are born and the day you find out why.”  For some reason, I don’t think THE EQUALIZER is what Mr. Twain had in mind.

He wants to change the life of Teri, played by Chloe Grace Moretz (KICK-ASS, HUGO). Teri wants to be a singer, but instead works as a battered-woman of the night for the Russian mob. After she defends herself against a violent customer, Teri is badly beaten by her mob boss. It’s heartbreaking, and it reignites something from Bob’s past. He’s a former FBI agent and killer. And he is coming out of retirement to take on her abusers.

From here on out its Bob vs. the Russian mob (and a few of Boston’s PD). While the head of the operation hides out in Russia, his hired guns fight against Bob. Teddy (played by Marton Csokas) is the top dog. He is an unhinged, cold-blooded killer, and that’s mostly what happens, killing, innocent and guilty alike.

THE EQUALIZER is the type of movie that reminds you of how desensitized viewers and movie-makers have become to violence – watching people get torn apart in the name of style. Where the implication of killing a bad guy with a huge mallet and putting it back on Home Mart’s store rack is a laugh-riot. Where the crowd cheers as the bad-guys are getting impaled with home gardening equipment.

Washington is fine in the film, of course. The highest praise he can earn here is that he makes the two plus hours tolerable. But shower him with compliments, I will not. This role clearly creates no challenges for the great actor. He smirks, charms and puts on a deadly straight face when he needs to. All calling cards for Washington, but for the guy everyone wants to cheer for, Washington’s character actually borders on unlikable.

Bob can take in a scene at a glance and know exactly how long the killing will take and the materials in the room needed for it. Cool I guess, except if Bob is that smart and well trained, why not find a different way to handle the situation, rather than splattering blood across the room?

The in your face, style over substance violence might make Zack Snyder (300, WATCHMEN, MAN OF STEEL) proud, but do we really need more films that portray unrelenting violence as a moral compass to stand behind, even if the bad guys are really that bad.

Few writers and directors make violence as a moral work. I’m thinking Quentin Tarantino (PULP FICTION, KILL BILL, DJANO UNCHAINED) where for every kill there are five laughs and the unwavering sentiment that this is supposed to be ridiculous. If only that was the case for THE EQUALIZER.

Antoine Fuqua (TRAINING DAY, OLYMPUS HAS FALLEN) directs. He clearly understands using action to reward an audience. In this case, Fuqua fails to live up to the billing of “director of TRAINING DAY,” a movie also starring Denzel. The two don’t repeat that success, even more alarming is you can’t help but feel that they may be trying to start a new franchise here for Washington. Safe to say, we’d all be better off if Washington used his talents on more formidable projects (2012’s FLIGHT was some of his finest work yet).

Ultimately, what we’re left with is a cold and uninspired film. THE EQUALIZER is a film unwilling to have any fun. It has all the appearances of an exciting birthday gift. Shiny on the outside, from somebody we love, but on the inside, socks. 1 out of 4 stars
Posted by Joseph Anthony at 12:23 AM