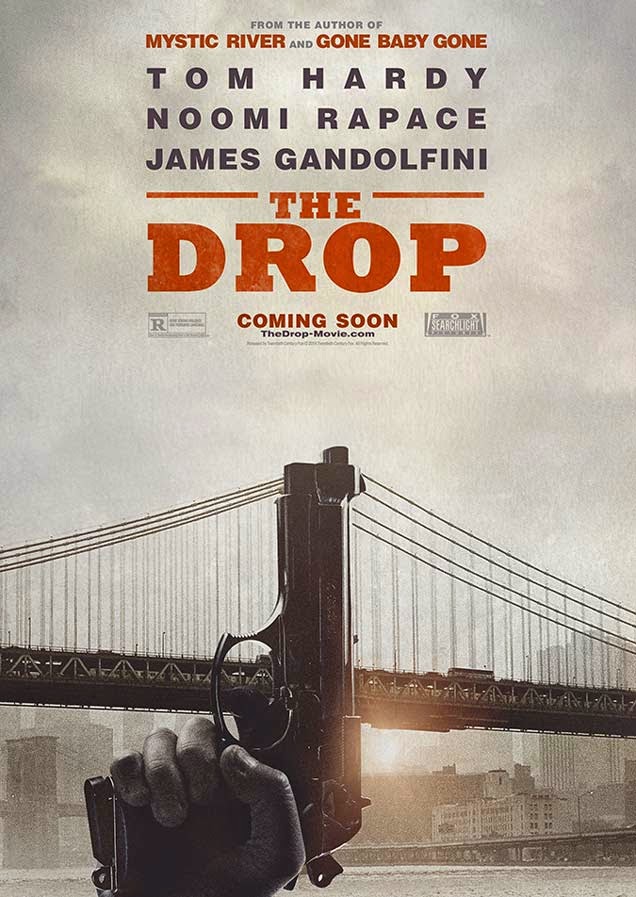 In Brooklyn, Bob Saginowski is just a regular bartender working for his cousin Marv. Bob, played by Tom Hardy (THE DARK KNIGHT RISES), is also a guy who can tell you where the cash drops are made – that includes his bar.  He and Marv, played by James Gandolfini (THE SOPRANOS), work for a Czechian gang.

One night, the bar is robbed by masked gunmen and $5,000 is stolen. Bob and Marv are on the hook for the cash and the Czechians want it, as you might have guessed. Calm by nature, the cousins know the consequences for not finding the money are real. The pressure comes from the outside too. Police are investigating the robbery, but lead Detective Torres, played by John Ortiz (SILVER LININGS PLAYBOOK), senses something is amiss.

THE DROP, the way I see it, is about lonely people. Everyone in the film seems to be looking for someone and something to fill a certain void. Bob’s loneliness leads him to Rocco, a puppy he finds abandoned and abused in a garbage can. In a chance encounter, the dog brings Bob to Nadia, played by Noomi Rapace (star of the original GIRL WITH THE DRAGOON TATTOO, PROMETHEUS). Nadia is yet another character in need of company. Rocco the dog brings Bob and Nadia together, but oddly enough finding Rocco is one of the most important developments in the movie.

An ominous tone takes over when Nadia’s ex-boyfriend shows up. The ex, Eric Deeds played by Matthias Schoenaerts, is not pleased with Nadia’s new-found relationship. Deeds seems almost bipolar, swinging from one mood to the other with every line of dialogue. His goal is unclear and his demeanor unsettling. Despite not being integral to the initial robbery, his introduction is one of the most interesting parts of this story.

Dennis Lehane wrote the screenplay based on his own short story “Animal Rescue.” Lehane is responsible for several New England crime epics, including MYSTIC RIVER, GONE BABY GONE, SHUTTER ISLAND and television's THE WIRE. Considered alongside those projects, THE DROP feels subtle, and a little dull perhaps. Some audiences will struggle to find something to get excited about.

The biggest drawback to the film as a whole is pace. It gets slow, especially for a movie advertised as a crime drama. But this is more of a character study than anything else. There is crime, but the movie often breaks action for character storylines and momentum gets lost. The movie slowly wanders and inches its way to an impactful conclusion.

Trailers for THE DROP have sold it as Gandolfini’s final vehicle, and you can’t blame the studio for that angle, but this is Tom Hardy’s show. Hardy captivates as Bob. And he does something kind of amazing – he takes a seemingly boring character and makes him complex (also a credit to the writing of Dennis Lehane). Bob often seems unintelligent, but at other times he corrects cousin Marv about culture and politically correct terminology. Bob seems naïve and a bit of a boob but always in control. Bob is a devout Catholic but refuses to take communion. In the hands of a lesser actor, Bob may have been a completely forgettable character.

James Gandolfini gives a respectable performance in his final motion picture. Sadly, the great actor passed away last summer as he was finishing this picture. Gandolfini plays it cool as the Brooklyn wannabe mobster. Seemingly calm on the outside, simmering on the inside. The role seems to be a fitting a way for him to leave the stage.

THE DROP is a mixed bag. Hardy and Gandolfini are perfect in their roles, but the total package is underwhelming. By the time the movie pays off – and to its credit, it definitely pays off!– it doesn’t feel as urgent as one might hope. While not incredibly memorable, the movie – particularly the performances – is enjoyable. 3 stars out of 4
Posted by Joseph Anthony at 12:12 AM