The Art of the Steal (now on video) 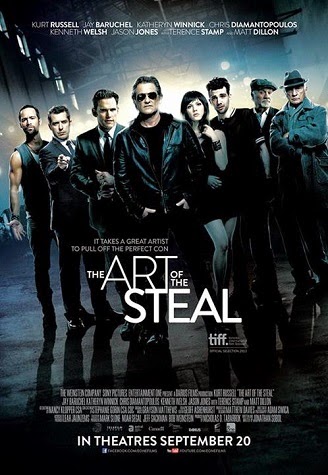 Canadian filmmakers poured lots of Hollywood-level money and international talent into this enjoyable, if over-plotted and farfetched 2013 caper movie. THE ART OF THE STEAL is at least as good/bad/kitschy as whatever's in the theaters right now, in our collective hangovers from late-summer junk season.

Writer-director Jonathan Sobol's flick has the fate to share a title with a recent documentary about a contested art collection, though it's no lie that art masterworks unethically obtained (and, in a pulp-fiction way, art appreciation) is the fulcrum of Sobol's plot.


`Crash' Calhoun (Kurt Russell) used to be a professional getaway driver specializing in art heists (!). But after high-speed scam goes wrong because his ace forger is just too meticulous about touching up a counterfeit Matisse, the gang is busted. Calhoun serves several years in an Eastern European prison, while his treacherous partner/half-brother Nicky (Matt Dillon) goes free.


Now Crash is subsisting as a battered Evel Knieval-type stunt cyclist, burdened with the expenditures of his much younger, party-girl wife. He is convinced into reassembling his old crew when an opportunity arises to steal a priceless medieval manuscript, the Gospel that Gutenberg printed after his famous Bible. It again involves a clever switcheroo of a fake relic for the real one during a brief, unguarded moment in Customs at the US-Canadian border.

Slippery Nicky is back on board, allegedly to make amends, but...can he be trusted? Furthermore, a group of police inspectors with an art-thief turncoat (the always welcome Terence Stamp) on their side also seem to be watching.

The biggest trick is on the viewer, and as in such con-caper movies as HOUSE OF GAMES, THE SPANISH PRISONER, MATCHSTICK MEN and the grand-daddy of them all, THE STING, not all you see can be trusted either. Even after the whole conspiracy is revealed and you have that open invite to rethink the plot (or rewind/watch again; God bless home video), it's still pretty puzzling. But the actors all seem to be having fun (complete with bloopers over the end credits), and Sobol serves up a little tangent episode about the real-life theft of the Mona Lisa that's a cute little trompe d'oeil CGI showcase as well as a film-within-the-film short subject.

Overall, THE ART OF THE STEAL on your home system isn't a bad way to spend a rainy afternoon. (2 3/4 out of 4 stars)