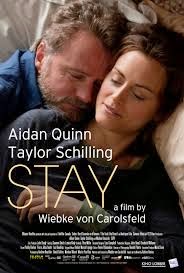 I guess most of the attention to STAY will be focused on the leading actress, Taylor Schilling. This pretty lady is a hot property for the moment thanks to the success of the Netflix series Orange is the New Black. Which I have never been paid to watch so cannot speak to its virtues.

But I can say that, with the rate of our celebrated actors meeting untimely ends lately (Paul Walker, James Gandolfini, Philip Seymour Hoffman, Robin Williams, Richard Kiel, the werewolf guy from Harry Potter), my advice to Ms. Taylor Schilling might roughly be RUN FOR YOUR LIFE! SHOWBIZ KILLS! Get out while you can! Who could say how much longer Lauren Bacall might have lived and what she might have achieved, had not Hollywood drained and degraded her?

Besides, for my part, the cool thing in STAY is seeing steely longtime Canadian actor Michael Ironside, late of villainy in countless cable-TV thrillers and sci-fi potboilers (not to mention being the bad guy in FREE WILLY and a doomed good guy in STARSHIP TROOPERS) finally getting to play a fairly normal-bloke supporting role.

Aside from that, director Wiebke von Carolsfeld's cross-cultural, loose-hanging sweater of a drama roams all over the map like so many sheep in a Celtic pastoral. Based on a novel by Aislinn Hunter, with which I am unfamiliar (come on, I finally got around to watching BATTLE BEYOND THE STARS for the first time; can't let a John Sayles property get past me), the tale concerns Abbey (Schilling). She's the Canadian-born, much-younger lover of Dermot Fay (Aidan Quinn), a charismatic Irish archaeologist. Dermot's comfy retreat in a postcard-like Irish village is actually an exile from his academic career in Dublin, where an affair with a student ended in a pregnancy scandal and tragedy.

When Abbey - who has never quite accepted in the rustic Eire - also becomes pregnant, the normally easygoing Dermot is outraged and says some cruel things that quickly cool their May-December passion. Abbey takes advantage of an already-planned visit to her father (Ironside, in a salt-pepper beard) back in Montreal to sort out conflicted feelings of where and with whom she belongs. It turns out she has commitment issues stemming from her mother's alleged abandonment long ago. Meanwhile, back in Ireland, Dermot starts to change his mind on the subject of children. He also uses his latent skills as archaeologist to throw up a makeshift dig on a pretense - turning a bog into protected land and sabotaging a disliked housing-development scheme that promised a few of the greedier villagers quick cash (a timely bit of detail since Ireland's recent economic "miracle" turned out rather badly).

The good ensemble performances, ambiance, weary-wise dialogue and Dermot's interesting mix of mentor and churlish cad maintain viewer interest - STAYing power, one might say - right up to the muted ending. Oh, and the male characters all drink to excess, rather fulfilling an uncomfortable cultural and ethnic stereotype. I guess STAY is the sort of flick that fills a few nice slots at any given international-film festival, then largely passes from view. But it makes an untypical addition to the Michael Ironside filmography next to a lot of stuff with the words "fatal" and "lethal" in the title. (2 1/2 out of 4 stars)