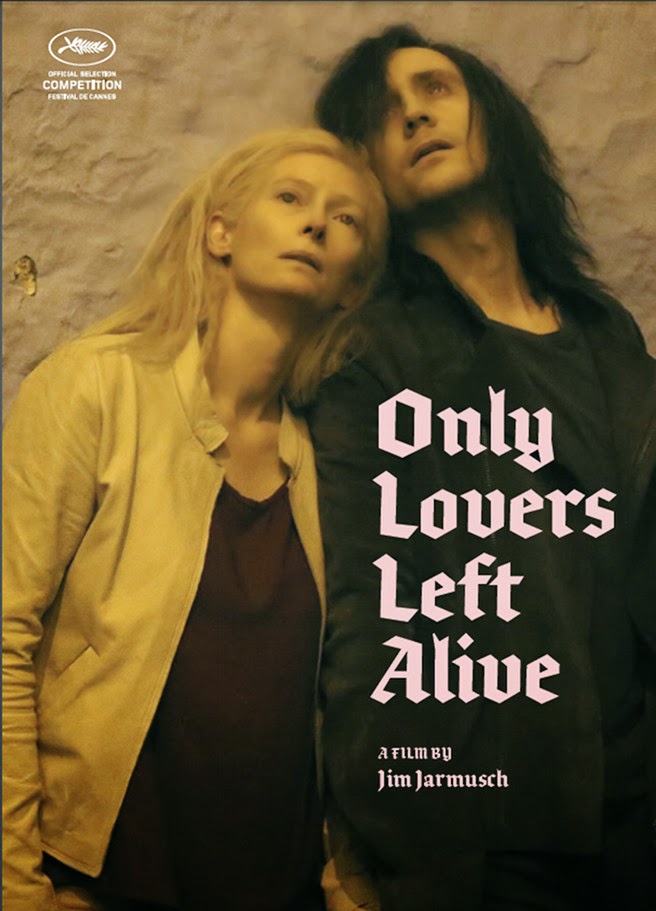 I've gotta' say, I never expected to read an interview with Jim Jarmusch in Fangoria magazine. Nonetheless, the noted indie filmmaker made it into the venerable journal of gory horror films earlier this year thanks to his latest effort, the moody vampire romance ONLY LOVERS LEFT ALIVE. In the piece, Jarmusch showed himself far better versed in the horror genre, particularly as it pertains to bloodsuckers, than most of the hacks who wind up helming Hollywood fright flicks these days. He even mentioned French director Jean Rollin, whose singular vamp films mixed erotica, psychedelia, and a certain kind of dreamlike romanticism, which immediately upped my level of interest in the film. And he wasn't just whistling "Dixie", as even the poster art for LOVERS recalls Rollin's work.

ONLY LOVERS LEFT ALIVE is essentially the story of an old (very old) married couple who still love each other, but have become someone stagnant and grown apart over the years. Quite literally, as Adam (Tom Hiddleston) is holed up in a decaying Detroit mansion, anonymously producing rock music for a small cult of fans,while Eve (Tilda Swinton) lives in Tangiers, seemingly enjoying her unlife more than Adam, but with an undercurrent of sadness.

Also living in Tangiers is an old friend of the couple, Christopher Marlowe (John Hurt). He keeps Eve supplied with “the good stuff”, vintage blood from an earlier time before the “zombies”, as the vamps refer to us humans, were so polluted. Adam has his procurers, too. A doctor (Jeffrey Wright) keeps him in blood, while rock fan Ian (Anton Yelchin) makes sure Adam has everything he needs to make his music, as well as filling other special requests like finding someone to make a wooden bullet.

Despite the distance between them, the three vamps are still very much connected, as exemplified by a scene in which Adam plays music in Detroit while Eve dances in Tangiers. More directly, Adam, Eve, and Christopher all find themselves dreaming of Eve's younger “sister” Ava (Mia Wasikowska). More a premonition, as it turns out, because shortly after Eve flies to Detroit at Adam's request, Ava turns up on his doorstep as well.

Ava is the polar opposite of the other vampires, a reckless force of nature who doesn't stop to ponder the consequences of her actions. Still, for all her faults she's at least “alive”, or as close to alive as the living dead can get. For all their wisdom and culture, and for all the possibilities eternal life should provide, Adam and Eve are merely existing.

As one would expect from a Jarmusch film, ONLY LOVERS LEFT ALIVE is leisurely paced and contemplative, filled with ideas worth pondering and visuals worth savoring. And when you have a first rate cast like this one, the performances alone would almost make the film worth watching. Thankfully there's more to it than just that, both in the compelling surface story and in the themes and symbolism lurking just below. It's a stretch to call it a horror film, nor does it fit into the tragic romantic hero mold of more modern vampire lore. Like the Rollin films Jarmusch mentioned in that Fangoria interview, this is a singular, melancholy, poetic kind of dark fantasy we seldom see on film. Smart, original, and expertly made, it's one of the year's best. 4 out of 4 stars.
Posted by Bob Ignizio at 12:50 AM