Half of a Yellow Sun (September 6th at the Cleveland Cinematheque)

[HALF OF A YELLOW SUN screens Saturday September 6th at 7:40 pm at the Cleveland Cinematheque.] 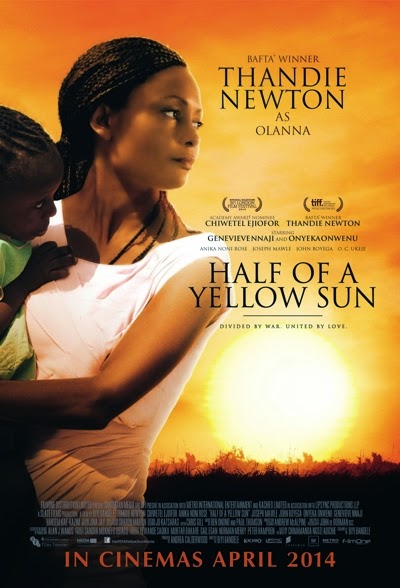 Hollywood isn’t much for sprawling historical epics these days, but fans of soapy spectaculars should find what they crave in the British/Nigerian co-production HALF OF A YELLOW SUN. The film follows upper class, English-educated Nigerian twin sisters Olanna (Thandie Newton) and Kainene (Anika Noni Rose) as they cope with rapid societal changes in the wake of their country gaining independence from Great Britain in 1960.

The film focuses primarily on Olanna and her love affair with Odenigbo (Chiwetel Ejiofor), a professor Kainene mockingly refers to as “the revolutionary”. Meanwhile Kainene has settled down with British writer Richard (Joseph Mawle), a frequent guest at the intellectual chat sessions hosted by Odenigbo. While the characters takes go through all the usual infidelities and betrayals one expects in middlebrow romantic historical dramas of this sort, political turmoil in their homeland buils, ultimately leading to full-blow civil war.

The biggest problem with HALF OF A YELLOW SUN is that it never quite properly balances its two sides. The sober, serious drama it wants to be at times gets shortchanged in favor of its melodramatic side. Yet we're still left with enough of a sense that the film is going for something deeper that it's difficult to enjoy on the level of campy cheese, at least not without feeling a little bit guilty.

On the plus side, the film looks gorgeous. It's every bit as sumptuous and colorful as a classic Hollywood epic. And of course it's always fun to see talented actors get a chance to go over the top a bit more than usual, particularly Eijofor who is generally so understated in his performances. And however much one might wish for a little more depth, for viewers like myself unfamiliar with the Nigeria-Biafra war, the film offers at least a serviceable entry level history lesson. 2 ½ out of 4 stars.
Posted by Bob Ignizio at 12:00 AM