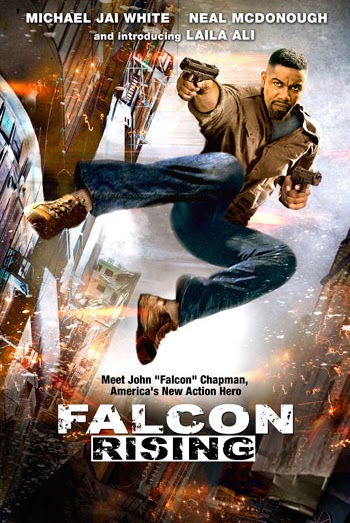 Michael Jai White's iconic performance as the titular hero of 2009's cult satire BLACK DYNAMITE should have been a star making performance. Why that movie didn't launch the muscular actor into a career as an action movie (or even comedy) star is beyond me, as his charisma and talent are undeniable. FALCON RISING probably won't change that, but it does possess a certain charm for fans of old school seventies and eighties low budget action flicks.

White plays John “Falcon” Champman, an Afghan war vet suffering from PTSD. He plays Russian roulette, and when a group of armed robbers hold up his favorite liquor store, he doesn't hesitate to take the punks out largely because he doesn't care if he lives or dies. About the only thing Falcon does care about is his sister Cindy (Laila Ali), who works with the poor of Brazil's favelas. When Cindy is brutally beaten and left in a coma, Falcon has to pull himself out of his despair and find out who is responsible. And with the Brazilian police all either corrupt or ineffectual, it looks like Falcon will have to mete out the punishment as well.

It's not so much Y.T. Parazi's generic revenge picture script that's the problem here – that's pretty much par for the course in this genre. Where FALCON RISING really comes up short is Ernie Barbarash's pedestrian direction. He does serviceable work here, but if you want an action film that's going to make an impact on audiences rather than just another straight to video time waster, it requires a filmmaker with a little more flash and style.

White does his best to carry the movie on his ample shoulders, and almost pulls it off, too. Like the best action heroes, he just embodies the part. He's a star, even if this movie doesn't deserve him. Other than White's star power, the film's saving grace is its action scenes. The fight choreography is well staged, and the climactic three-against-one showdown between Falcon and crimelord Hirimoto (Masashi Odate) and his dirty cop henchmen Kuka (Daniel Cardona) and Carlo (Lateef Crowder) is bone-crunching mayhem at its best. Again, would have been nice if it were shot and edited a little better, but it still satisfies.

FALCON RISING is getting a very limited theatrical run, and despite my issues with the film, I think that's great. It probably won't fly for those viewers used to nothing but slick Hollywood product, but those who still appreciate the idea of watching a fun “B” movie on the big screen rather than on the TV should be more forgiving. It's not a great movie, but it delivers where it counts. 2 ½ out of 4 stars.