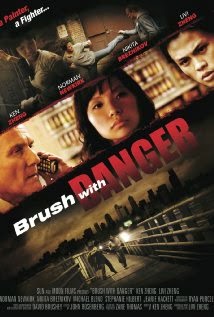 Following in the footsteps of countless martial artists before them, Indonesian brother and sister Ken and Livi Zheng try to translate their fighting prowess into screen stardom in BRUSH WITH DANGER. In the film they play siblings as well, Alice and Ken, just recently arrived illegally in Seattle. To make money, they set up in a park and try to sell Alice's paintings, with Ken doing his best to drum up business. They only get attention, however, once they put on a martial arts and acrobatics demonstration.

The demonstration catches the eye of local gallery owner Justus Sullivan (Norman Newkirk). When he comes over to give the duo some money, he finds himself impressed by Alice's artwork and offers to take the girl under his wing. He also helps Ken find work as a fighter. It truly seems, as Ken himself declares, that they're, “living the dream!”

While Justus is impressed by Alice's original work, it's her reproductions of famous masterpieces he's really interested in. It soon becomes clear that what he's only helping Alice and Ken so that Alice will make forgeries for some of his criminal clients. Meanwhile, the police are investigating the death of a young Asian girl who had lead based paint on her hands and clothes. Hmm, could there be a connection?

Not only do the Zheng's star in the film, but they wrote and directed as well. Whether this was by choice or necessity, trying to do so much themselves doesn't always work in their favor. Anyone who is a fan of these kind of movies isn't likely to be bothered by the stars heavily accented delivery – it certainly never hurt Jackie Chan, Arnold Schwarzenegger, or Jean Claude Van Damme – but some of the cultural differences that seep into other aspects of the film give it a slightly off kilter feel. The whole vibe of the film is of someone who doesn't really get American culture trying their best to depict it. There are also some real doozies in the dialogue department, perhaps my favorite coming early in the film when feisty older woman Elizabeth (Stephanie Hilbert) is being mugged and the siblings come to her rescue - “Oh thank God, Asians,” she exclaims.

So yeah, there are a few unintentional laughs, but we're not talking THE ROOM or BIRDEMIC here. The Zheng's have a general level of filmmaking competence, and on the technical side this is on a par with your average grade B actioner. The acting is about on that level, too. Everyone here besides the two leads seems like a real actor, but more on the better end of local theater than movie star. In other words, a few slightly awkward line readings here and there, which frankly could have been due to the direction as much as anything, but no one is a complete incompetent.

Of course the main attraction in a film like this are the fight scenes. A little more action would have been nice, but the bits that are here are executed well. The Zheng's style is more gritty and street level than what tends to be the norm in martial arts films, but that's fine by me.

This isn't the kind of action movie that's going to work for audiences expecting big budget Hollywood thrills. Its more of a blue collar action movie, perfect for the kind of viewer who just wants to see some old fashioned ass kicking and stuntwork and doesn't need big special effects sequences or over the top set pieces. Maybe with an outside screenwriter and director and a moderately larger budget next time, the Zheng's could fare even better, but for what it is, BRUSH WITH DANGER is reasonably entertaining despite its shortcomings. 2 out of 4 stars.