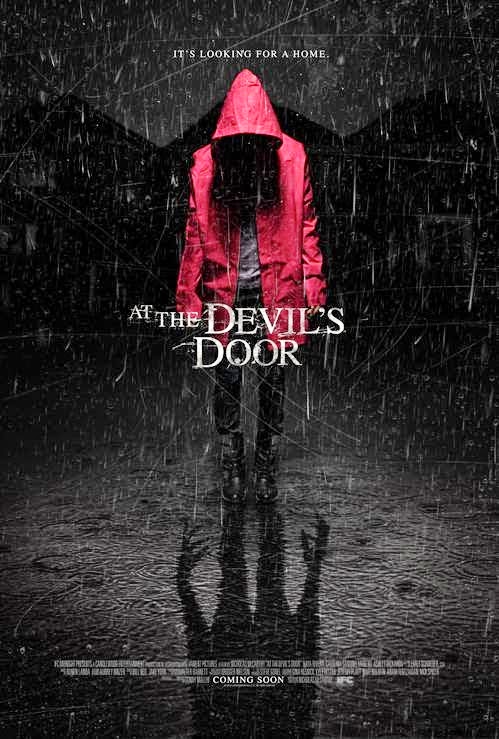 Cliches abound in this by the numbers devil baby shocker. At the urging of her boyfriend, Hannah (Ashley Rickards) makes a deal with the Prince of Darkness for a measly five hundred bucks. And she does it without even bothering to find out what her end of the bargain is. Well, as it turns out, she hasn't just sold her soul; she's rented out her uterus to be surrogate mom for the Antichrist. As Satan is wont to do, he handles the impregnation by levitating Hannah and tossing her around her bedroom ala THE ENTITY. Don't they have turkey basters in Hell?

Before we can even get a chance to wonder if it'll be a boy or a girl, the movie abruptly jumps forward a few years and introduces us to a new protagonist, real estate agent Leigh (Catalina Sandino Moreno). She's just been hired by an extremely nervous couple to sell their home, and guess who else used to live there? Your usual modern haunted house movie shenanigans ensue, and we eventually learn what happened to Hannah and why the Devil is still in the market for a mommy.

You'd think given the set-up that the next unlucky egg donor would be Leigh, but nope. Despite being almost an hour in to a 90 minute movie, we switch gears yet again and settle on our final leading lady, Leigh's artist sister Vera (Naya Rivera). By this point, we have little idea of how this whole Satanic insemination thing works, but it sure seems like a pretty convoluted route to go to have a baby.

AT THE DEVIL'S DOOR moves at a snail's pace, and yet despite that never really does anything to develop its three main characters beyond the surface. The only reason we care about them at all, other than the fact that they're the victims in a horror movie and naturally get our sympathy, is the actresses all do strong work despite having little to work with.

The plot ins't especially interesting, either. Unless you're a horror film newbie, you've seen this same premise countless times before. Hell, even if you are a newbie, this is pretty much the same schtick that keeps the PARANORMAL ACTIVITY series going, seemingly forever. Arguably DEVIL'S DOOR is better than any entry in that tiresome franchise, but it can't hold a candle to ROSEMARY'S BABY, THE OMEN, or DAY OF THE BEAST. Hell, it's not even on a par with the trashy thrills of THE ENTITY or THE MANITOU.

The one area where writer/director Nicholas McCarthy does deliver the goods is in the scares department. Sure, it's just the usual assortment of half seen creepy images and jump scares, but McCarthy pulls 'em off like a pro. And for horror fans just looking for a few jolts, that may be enough to make this one worth checking out.

The sad thing is, McCarthy has shown he's better than that. While I was watching this movie, I kept thinking to myself that a straight to video movie I'd seen a while back called THE PACT had done some very similar things much better. Turns out McCarthy wrote and directed THE PACT, too. It even has a similar structure with one protagonist giving way to another. THE PACT still has plenty of scares, but it also fleshes out both characters and plot. It's not perfect, either, but overall it's a much more interesting work than AT THE DEVIL'S DOOR. 2 out of 4 stars.
Posted by Bob Ignizio at 4:45 PM