As Above, So Below 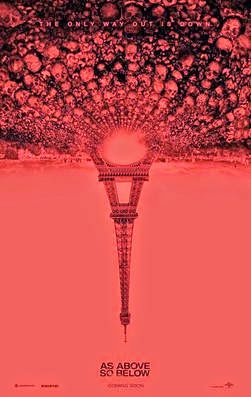 Abandon all hope, ye who enter this movie.

Okay, so maybe AS ABOVE, SO BELOW isn’t quite that bad.  It’s just that the script doesn’t really go anyplace, except in circles.  Kind of like the labyrinthine tombs featured in the film.

Directed by John Erick Dowdle (QUARANTINE, DEVIL), this latest exercise in “found footage” horror ushers viewers into the real-life 18th century catacombs that run for miles beneath that romantic city of lights, Paris, for voyeuristic glimpses of the misadventures of a team of youthful explorers who lose their way—and nearly their minds—while hunting for treasure.

To archeologist Scarlet Marlow (the lovely Perdita Weeks), said treasure is The Truth.  Scarlet holds several doctoral degrees, appears confident when addressing the camera for documentary filmmaker Benji (Edwin Hodge), and acquits herself marvelously during an opening gambit in some condemned Iraqi caves, where she unearths clues to greater finds in France.

She’s also impulsive.  Haunted by the death of her mentally ill father years ago, Scarlet’s enthusiasm often yields to recklessness—like the kind that landed her former boyfriend in a Turkish prison.

Scarlet’s determined to find a Parisian philosopher’s stone—a magical gem with transformative powers over the elements—but she requires the assistance of said ex-beau George (Ben Feldman) to translate the glyphs she photographed in Iraq.  George (whose downtime consists of renovating ancient clock towers) agrees to help with linguistics, but he’s reluctant to go spelunking.  He’s got his personal demons, too.

The first act plays out like a mishmash of NATIONAL TREASURE and BLAIR WITCH PROJECT:  Headstrong Scarlet thinks nothing of burglarizing churches or igniting flammable liquid on headstones if doing so might reveal a hidden message.  Benji’s ever-present lens captures the latent love between the intrepid intellectuals as they track clues left by legendary historical figures, like scrivener-alchemist Nicolas Flamel.

In order to access the portions of the catacombs normally off-limits to tourists, Scarlet and George enlist the services of streetwise guides Papillon (Francois Civil), Zed (Ali Marhyar), and Souxie (Marion Lambert).  Climbing through fences and hiking into an abandoned subway, the team is just able to locate their point-of-entry (beneath the gaping jaw of what appears to be Iron Maiden’s mascot, Eddie, spray-painted on a wall) before police can catch them.  The first of several cave-ins traps George with the group, and means there’s no going back the way they came.

We’re told the catacombs house the remains of some six million people, but our gang is less concerned with bones than the enchanted jewelry Scarlet believes lay hidden hundreds of feet deeper.  Bypassing the usual tunnels, the party burrows through rubble and take a few unexpected turns, with Benji’s head-mounted pin-cameras clocking their movements for the audience.  Like TOMB RAIDER’s Lara Croft, Scarlet pokes at enigmatic drawings and yanks on Ptolemian hinges to unlock unseen doors, open hidden passages, or spring the false floors that dictate their next move.  Things get weird when Pap sees his graffiti “tag” in an area he knows he’s never visited, and when his old friend—lost for two years beneath in the tunnels—suddenly turns up.  Scarlet gets a prank call on a vintage phone that has no power (we’re told up front cell phones won’t work underground).  George finds a piano that belonged in his childhood home and has no business being there; the A-4 key thuds when he plays “My Bonnie Lies Over the Ocean.”

Scarlet is willing to forgo her discovery as things get freakier.  But when secondary and tertiary collapses effectively block the way out, even cold-footed George agrees it’s best to keep going—and the only way up is down.  Dowdle and his screenwriting brother provide some effective scares, ambushing certain characters with white-faced ghouls and hooded phantoms.  However, most of the bloodshed in AS ABOVE is begotten by injuries from falls and scrapes, not stereotypical machete / hatchet attacks or zombie bites.  There’s a lot of red, but not enough to traumatize today’s average teen.

Things get goofy in Act III, when Scarlet stumbles upon what she believes to be the entrance to H-E-L-L itself.  Translating the inscription above the craggy “gateway,” George rather underwhelmingly quotes Dante Alighieri.  Moving inside, the surviving team members realize they must navigate a mirror image of the route they’ve just taken—tunnels, pits, underwater pools and all.  Scarlet also intuits that each of them must likewise reconcile his or her secret fears and achieve “rectification” to escape their psychological prison.

There’s nothing illusory about the creepy-faced cult girl, hooded man, and little boy seen roaming the halls, however.  They strike unexpectedly from dim corners and murky pools, leaving very real wounds no sorcerer’s stone can heal.  But these figures and events are never truly explained, making for an abrupt and anticlimactic ending.  No discussion, no “Was it all a collective hallucination” debate.  That’s for us to ponder.

The “found footage” technique is used well, but the fact that we’re watching all this tips us off that at least one person lives through the subterranean ordeal.  Benji’s expository clips with Scarlet and George are steady and clear, like material from a reality TV show.  Conversely, the assembled feeds from the explorers’ six roving head cams are grainier and shaky, and heighten the sense of claustrophobia.  At ninety minutes, AS ABOVE is a brisk, if average, haunted house-type picture that’ll do in a pinch on late night.

Weeks—a veteran of British miniseries like GREAT EXPECTATIONS and TITANIC—is effective as the overzealous Scarlet, a scream-queen who (predictably) comes to understand that maybe they shouldn’t have come snooping.  Feldman (MAD MEN) plays George as a smart but soft-spoken cryptographer whose unrequited feelings for Scarlet rise the further down they go.  Civil’s take-charge guide is good for a few laughs. 2 out of 4 stars.