[A COFFEE IN BERLIN screens Thursday September 11th at 6:45 pm and Friday September 12th at 9:20 pm at the Cleveland Cinematheque.] 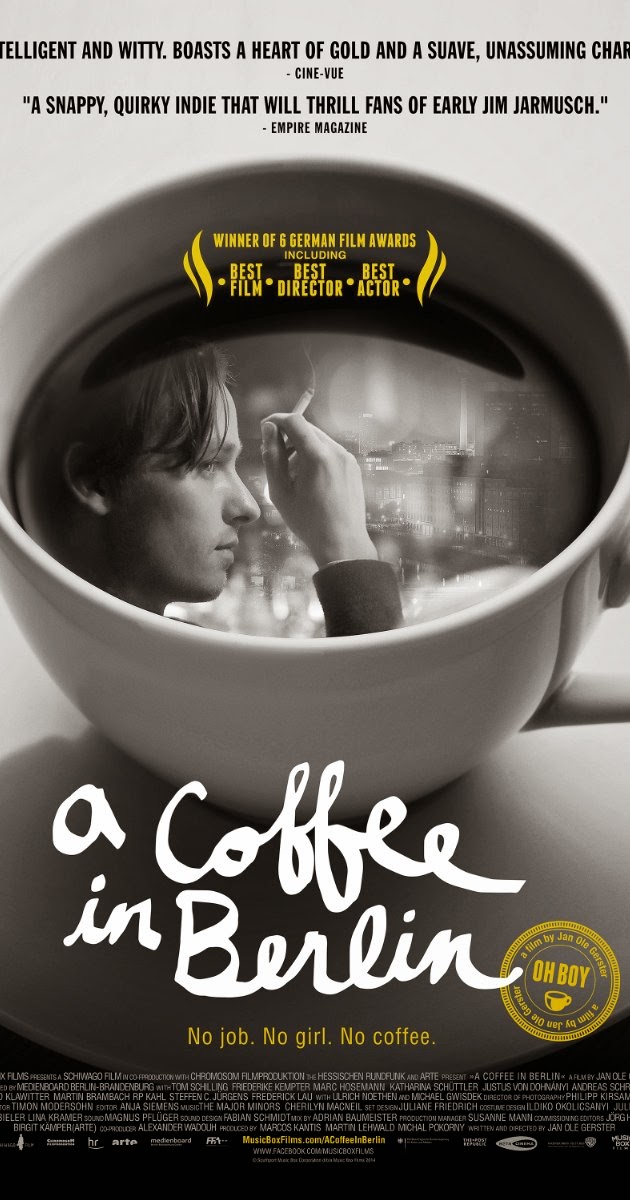 The reaction friends had when I told them I was going to be watching a German slacker comedy was fairly consistent: “They have slackers in Germany?!” Yes – the stereotypical precision, focus and efficiency America associates with German culture are far from the associatives invoked alongside names like Spicoli, Wayne Campbell or Dante Hicks. By the same token, “slacker comedy” – a descriptor I cadged straight from the Cinematheque program – isn’t quite representative of Jan-Ole Gerster's debut film (and winner of 6 Lolas) A COFFEE IN BERLIN (OH BOY in its native country), a slight and charming rumination on modern Berlin as seen through the eyes of a wandering twenty-something who’s as parched for direction as he is for the titular cup o’ Joe.

All semantics aside, Niko (Tom Schilling), an unemployed, college dropout who, in the film’s opening scenes, has his driver’s license revoked during a court-ordered psych evaluation following repeated drunk driving arrests, is, most definitely, a slacker. But unlike the Cheetoh-snarfing, denim-wrapped couch surfers of the classic American slacker oeuvre, Niko doesn’t drape his inaction in armchair philosophy, take potshots at mass culture, or embrace inaction as the hip new zen. Instead, he moves quietly through the city, his perceived purposelessness chafing at him as he encounters family, strangers and friends, listening to their stories while simultaneously struggling to discover a narrative all his own.

If the Cinematheque program’s use of the phrase “slacker comedy” doesn’t feel wholly apt, the rest of their description is dead on: “The movie’s droll, laid-back humor and charm, and its b&w camerawork, recall early Jarmusch, while the jazz score evokes Woody Allen.” (I know – quoting someone else’s blurb… who’s the slacker now?)  Set over a single 24-hour period, and loosely structured around Niko’s persistent inability to score a cup of coffee, it’s easy to recognize some of Jarmusch’s arthouse caricatures embodied in the lonely neighbors, performance artists, drug dealers and film actors he meets.

In offering a window into each of these characters lives, Gerster gently explores the relationship between a person’s societal role and that individual’s behavior and temperament. It’s a chicken/egg quandary inside which Niko seems trapped as he wanders through Berlin, leaving the viewer to question whether his lack of ambition stems from his inability to identify a path suited to his temperament, or out of a fear of choosing a vocation that might change his fundamental being.

Amid all of this, Berlin takes center stage, it’s sterile heart, cultural fringe, suburban sprawl, and time-faded shadows of the Reich all crowding in around our shuffling protagonist.

Though it's TAXI DRIVER that one of Niko's friends quotes as the two speed through the city streets, the Scorsese reference to which my mind repeatedly returned was AFTER HOURS - a single-day timeline, the picaresque structure, the parade of believable eccentrics and, of course, a young man’s repeatedly foiled attempts to reach a single, simple destination. For  the frantic Paul Hackett, that banal-yet-unattainable end point was an empty apartment and familiar bed; For Niko, in the affable, breezy A COFFEE IN BERLIN, it's a mug of hot coffee. (3 out of 4 Stars)
Posted by Matt Finley at 12:43 AM