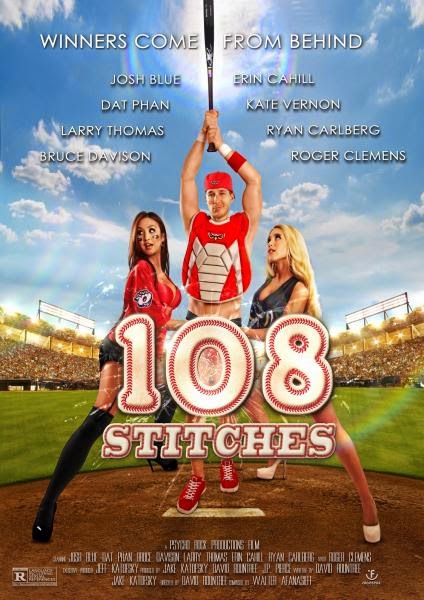 If you were to cross ANIMAL HOUSE with MAJOR LEAGUE and then suck out all the funny, you'd wind up with something a lot like 108 STITCHES. I'm not sure why you'd want to do that, and I imagine it's not what director David Rountree and his team of co-writers intended – the sucking out the funny part, that is – but things don't always go as planned.

The film concerns the usual band of wacky misfits, in this case college baseball team that hasn't been a contender in a very long time. Our window into the team is Vietnamese recruit Phan Quan (Dat Phan), your classic “fish out of water” and more or less a Vietnamese Long Duk Dong (if you don't know what I'm talking about, see SIXTEEN CANDLES). The only English he knows are quotes from American baseball movies, and that's not going to help him deal with the Delta House style debauchery and shenanigans orchestrated by team captain Frank Bender (Ryan Carlberg), a third rate Bill Murray type anti-authoritarian slacker who will, of course, rise to the occasion when the chips are down. And of course, we have to have an uptight authority figure trying to destroy our lovable losers, and who better than Kate Vernon, daughter of Dean Wormer himself, John Vernon, as President Pratt.

Let's not mince words. This movie is awful. Not only is it not funny, it doesn't even have the guts to embrace its lowbrow exploitation movie roots like a decent ANIMAL HOUSE rip-off should. Just to give you an example, in an early scene some of the players make a topless girl stand up in the swimming pool everyone is lounging around. And it's not like the movie is trying to keep things classy and PC with jokes about calling a girl “Homework” because everyone does her. The people who go to movies like this go for two things: laughs and boobs. 108 STITCHES offers neither.

The film is competently if blandly shot and the acting is serviceable, but that's about the highest compliment I can pay it. Certainly the editing deserves no priase: the two hour running time is excruciating. Viewers would be better off dredging up such eighties also-rans as WEEKEND PASS or JOYSTICKS. 1 out of 4 stars.
Posted by Bob Ignizio at 12:08 AM