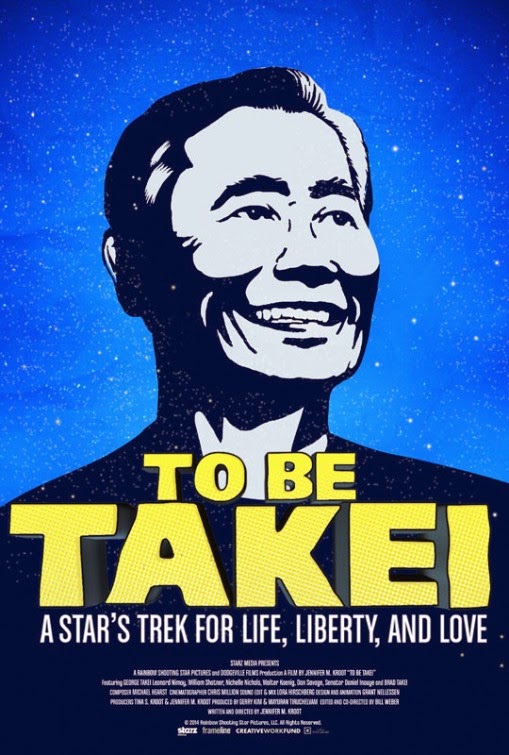 George Takei has led an interesting life. As a child he spent time in a Japanese internment camp. As an actor, he became an icon for his role as Mr. Sulu on Star Trek. And in recent years he's come out of the closet as a gay man, appeared as a semi regular on the Howard Stern show, worked as spokesperson for Human Rights Campaign "Coming Out Project", and found a whole new generation of fans and level of fame through his extremely popular facebook page. All this and much more gets covered in Jennifer M. Kroot's new documentary on the actor and activist, TO BE TAKEI.

The film basically hangs out with George and his husband Brad (the two have been together for over 20 years). Mostly it's just George and Brad talking about George's life and career. In addition to the usual clips and photos, we also get interviews with George's fellow Trek cast members William Shatner, Leonard Nimoy, Nichelle Nichols, and Walter Koenig, Hawaiian congressman Daniel Inouye, shock jock Howard Stern, sex columnist Dan Savage, and other friends and family members. In short, it's your standard celebrity profile documentary, well put together by Kroot and her editor Bill Weber. It's nothing earth shaking; just a positive, uplifting, and funny film about an nice guy.

If there's any real fault with TO BE TAKEI, it's that its subject is so easygoing and content with life that the film is a bit lacking in drama. Even when talking about his time in the camps, one senses a surprising lack of bitterness from Takei. He certainly makes it clear what a horrible experience it was, and it's an issue he feels needs to be talked about publicly (to which end he recently wrote a musical, Allegiance, dealing with the subject), but it doesn't seem like something he dwells on in his personal life. Evidently he's too busy enjoying his late in life career renaissance and doing what he can to make a positive impact on the world. It really is okay to be Takei. 2 ½ out of 4 stars.
Posted by Bob Ignizio at 12:00 AM