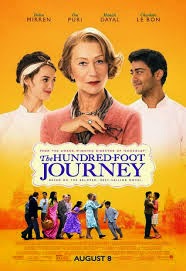 Be sure to work up an appetite before seeing Leslie Hallstrom's newest film, THE HUNDRED FOOT JOURNEY, based on the novel of the same name by Richard C. Morais. The film, at it's core, is about food, and the expert preparation of that food. Mixed with family, romance and a fair bit of drama, producers Oprah Winfrey and Steven Spielberg hope to win audiences over by serving up a "delicious" film.

The film begins with the Kadam family, restaurant proprietors from India, moving to South France in order to start a new restaurant in a small, quaint town. The restaurant's food would be prepared by the young, budding chef, Hassan (Manish Dayal), who took after his deceased mother when it came to the cooking gene. Hassan's Indian cuisine is exquisite, and his father (Om Puri) is determined to show the French a bit of their spicy flavor.

The restaurant happens to be across the street from the village's top eatery, a Michelin-starred, critically acclaimed spot owned by the poised and cold Madame Mallory (Helen Mirren). Madame Mallory is less than enthused by the loud dose of culture parking so close to her fine establishment and naturally, competition ensues.

Mixed into the chaos is Hassan's secret romance with Madame Mallory's own sous-chef, Marguerite (Charlotte Le Bon). It is quickly that the viewer realizes that this film isn't just about food. Much broader themes are brought into the picture: family, love, loyalty, and jealousy. At a point, it simply becomes too much.

What starts as an intriguing movie about competitive families and delicious delicacies, quickly becomes stereotypical and unoriginal with each theme is portrayed as a lesson. And once the end product becomes evident, the film becomes predictable and downright boring.

For lack of a better word, Hallstrom's film is cheesy. Viewers may find themselves rolling their eyes at numerous points as scenes that are meant to be portrayed as warm and tear-jerking come off as inauthentic and fake.

Even excellent performances from Dayal and veterans Mirren and Puri aren't enough to save THE HUNDRED FOOT JOURNEY, although many will find the banter between the latter two playful and endearing.

THE HUNDRED FOOT JOURNEY had all of the ingredients to create a delicacy in cinema, however, they weren't used correctly, leaving viewers with a mediocre dish not worthy of even one Michelin-star. 2 out of 4 stars.
Posted by Grace Snyder at 2:19 PM