The Freshman (August 21st and 24th at the Cleveland Cinematheque)

[THE FRESHMAN screens Thursday August 21st at 7:00 pm and Sunday August 24th at 4:30 pm at the Cleveland Cinematheque.] 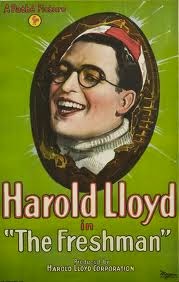 There are some people in this world who refuse to watch black and white movies, let alone silent ones. They presume, incorrectly, that such films will be dated and hokey and hold no relevance to them. These folks need to see a movie like THE FRESHMAN. The premise, the plot, the pacing, and the jokes all feel very much contemporary, and unlike the films of Chaplin or Keaton, could probably work just as well as a talkie. Sure, there are aspects of the film that date it, but not much more than if one were to make a film today and set it in the 1920s.

In the film, the young, optimistic Harold Lamb (Harold Lloyd) is extremely passionate about gong to college at Tate University. He learns all the college chants and fight songs, and fills his head with fictional stories of Big Men On Campus. Lamb believes he can be the most popular guy at school and a football star, never mind that he's socially awkward and not much of an athlete.

Harold soon gets the nickname “Speedy Spender” due to his tendency to buy things for his new “friends”, who secretly laugh at him behind his back. His enthusiasm does earn him a place on the football team, but unbeknownst to Harold the coach has no intention of actually letting him play. He's there as more of a mascot, as well as the team's waterboy. Only Peggy (Jobyna Ralston), the landlord's daughter, sees Harold's true potential and likes him for who he is. Of course in true movie fashion, Harold is too busy trying to impress everyone else to notice true love right in front of his face.

Although Lloyd was known for performing dangerous stunts in many of his films, the gags in THE FRESHMAN seem decidedly more down to earth. Which is not to say they aren't funny. There's plenty of slapstick, a great bit involving a tailor trying to keep Harold's suit from falling apart at a party, and of course some football antics when waterboy Harold finally gets put in the big game.

Overall THE FRESHMAN feels more populist and less auteur driven than the films by Chaplin and Keaton, his comedy contemporaries, that I've seen. In fact, unlike those two silent era comics, Lloyd does not direct himself (those duties fall to Fred C. Newmeyer and Sam Taylor). It's not on a par with the best of Chaplin or Keaton, but it's still a highly entertaining film. 3 out of 4 stars.
Posted by Bob Ignizio at 2:18 AM