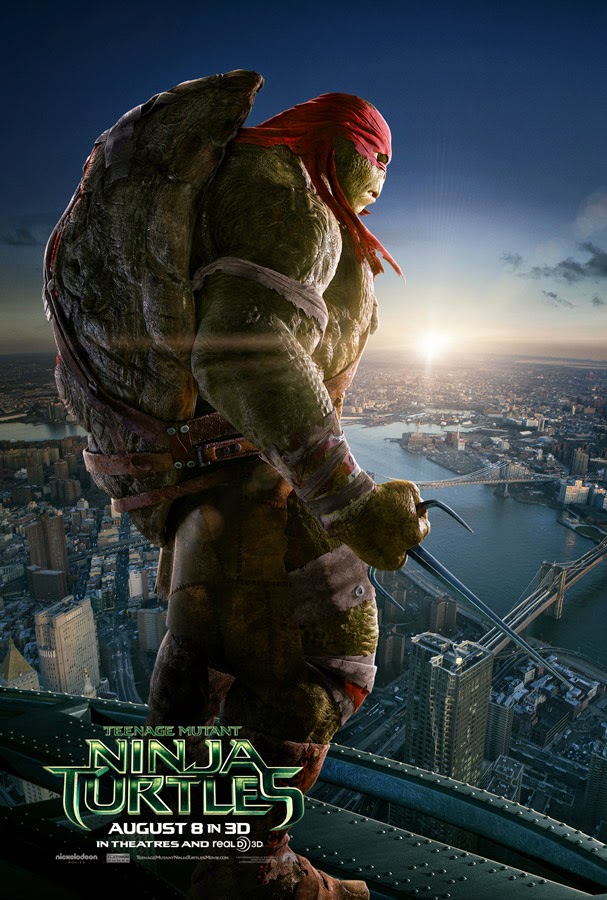 Starting life as a small press comic book in 1984, the Teenage Mutant Ninja Turtles became a huge phenomenon as an animated kid's show that debuted in 1987. There were a few live action films made in the early nineties alongside the cartoon, and countless merchandising tie-ins were sold before Turtlemania eventually burned out around 1996. Now that those kids who made the show such a success are old enough for nostalgia and to have kids of their own, it's time for a reboot.

The plot of TEENAGE MUTANT NINJA TURTLES is that a bunch of bad guys with martial arts skills called the Foot Clan doing dastardly deeds in the big city. Reporter April O'Neil (Megan Fox) figures if she gets the scoop on the evildoers, she'll get promoted to doing real news instead of fluffy human interest stories with her cameraman Vernon (Will Arnett). While filming the Foot Clan taking part in a heist, April is surprised to discover that a quartet of vigilante humanoid turtles are fighting back. Her boss (Whoopi Goldberg) doesn't believe her, but her deceased father's old partner in cutting edge science, Eric Sacks (William Fichtner), takes her claims very seriously. Because, as just about everyone knows the moment they see Fichtner on screen, he's one of the bad guys, second only to armored ninja warrior Shredder (Tohoru Masamune). Of course it's up to the Turtles – Raphael (Alan Ritchson), Michelangelo (Noel Fisher), Leonardo (Pete Ploszek, voiced by Johnny Knoxville), and Donatello (Jeremy Howard) to save the day and make their sensei Splinter (Danny Woodburn, voiced by Tony Shalhoub) proud.

TEENAGE MUTANT NINJA TURTLES is the second Michael Bay production based on licensed characters to be released this summer, the first being TRANSFORMERS: AGE OF EXTINCTION. As one expects from a Bay production, it's dumb, it's loud, and it's frenetically paced. Anyone who cares about actual movies will probably hate it, but enough kids will love it that we're sure to see a sequel.

Bay only produced TMNT, handing the directing reins over to Jonathan Liebsman (WRATH OF THE TITANS, BATTLE OF LOS ANGELES). Regardless, this looks and feels like a Bay film. The biggest difference between this and Bay's own work is that it's nowhere near as self indulgent. Rather than the 3 hour endurance tests that are the Transformers films, this is just a hair over an hour and a half. That automatically makes it better than AGE OF EXTINCTION. Also the plot, generic as it is, is not nearly as incomprehensible. Which, honestly, is better than I would have expected. It still sucks. 2 out of 4 stars.
Posted by Bob Ignizio at 12:00 AM