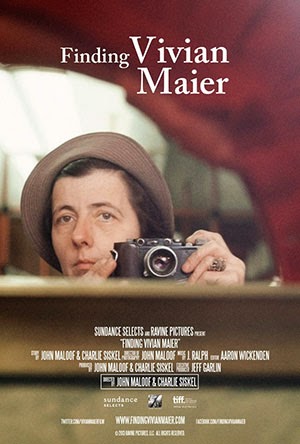 It's kind of like the most interesting episode of Storage Wars ever. John Maloof (who co-wrote and directed this documentary with Charlie Siskel) bought some boxes of negatives at an auction. Those negatives turned out to be an amazing stash of never before seen street photographs of Chicago. Initially Maloof didn't do much with the photos, since everyone he talked to said they were nothing special. But once he had time to sit down and really go through what he had, he realized just how important this collection was.

Maloof started developing some of the film and posting the best pictures online. Response was enthusiastic, so he continued with the project. But as fascinating as the pictures were, he wanted to know more about the woman who had taken them. As it turns out, that story is just as enthralling as the photographs themselves.

The documentary FINDING VIVIAN MAIER tells as much of that story as apparently can be told, giving at least some insight into the eccentric (some would go farther and say mentally ill) nanny/photographer. And just as one can't help but admire Ms. Maier's skills with a camera, by the time the film is over, one is equally glad they never had her as a caregiver.

Maier's life ultimately proves little more than a footnote in history, but for those with an interest in oddballs and outsiders it's a compelling one that once again proves the old axiom that it's often best to separate the art from the artist. As for the art itself, Ms. Maier's photographs provide a fascinating look at a bygone era through presented in a visually striking manner. Put the two aspects together, and you get one very engaging film. 4 out of 4 stars.
Posted by Bob Ignizio at 1:15 AM