[REGARDING SUSAN SONTAG is playing at the Nightlight Cinema in Akron from August 10th until August 21st.] 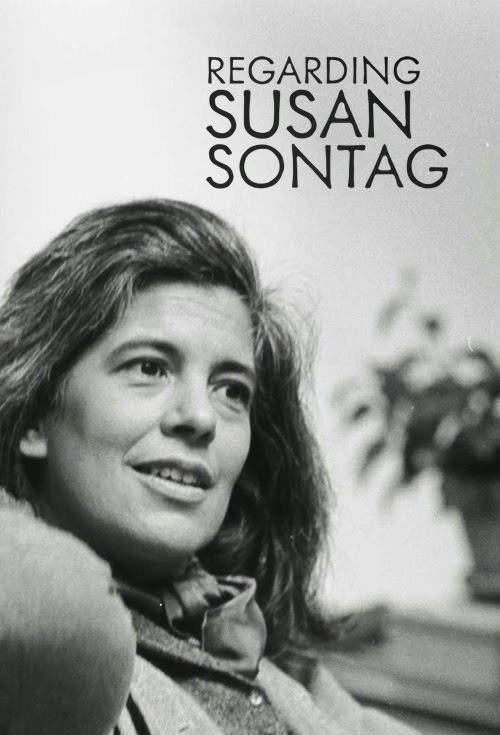 Before watching REGARDING SUSAN SONTAG, I have to admit I didn't know much about the film's subject beyond that she was a person of some cultural significance. I seemed to vaguely remember that she was a writer. After watching the film, I'm still not sure I really have much of an understanding of just why Ms. Sontag is so important. I'm not arguing that she isn't; just that the film didn't do a very good job of conveying her career accomplishments to the uninitiated, instead devoting far more time than was probably necessary to Ms. Sontag's string of love affairs, mostly with women but a few men as well. As the film explains, Sontag didn't like to be pinned down by labels, sexually or otherwise.

There's no disputing that the personal lives of public figures are relevant, and can often shed light on what made them who they are. But when assembling a biography, whether on film or in prose,  finding the right balance between the private and public life of the subject is crucial. Those who already have a fairly good handle on Sontag's career as a poet, essayist, fiction writer, filmmaker, and social critic may well find the detailed look at her personal life REGARDING provides interesting and illuminating. For those more interested in what she did and why it mattered, however, the film is considerably less satisfying.

The emphasis on sexual escapades doesn't prove nearly as titilating as one might expect, either. We're dealing mostly with a bunch of academics here, and even when discussing sex the talk can be a bit dry. I did at least chuckle when one of Sontag's lovers described the lovemaking skills of still another by remarking that, “she could make a stone come.” As for Sontag herself, although she clearly possessed a strong sexual charisma, several past lovers describe her as insensitive and self centered, which likely explains why she went through so many of them.

One of the few things of substance one learns about Sontag's work from the film is her interest in playing with form and structure. Unfortunately REGARDING director Nancy D. Kates doesn't take many chances with the by-the-book biographical documentary format. There's nothing wrong with the parade of talking heads and clips approach, but in this case finding some way to make the film more visually or structurally original would made sense. What attempts there are in that direction, like a shot of a stack of letters that gets repeated a few times, aren't particularly effective.

REGARDING SUSAN SONTAG is by no means a bad film or devoid of interest. Even for those  who leave the film feeling less informed than we might have hoped, what is here is at least enough to inspire further digging. One also appreciates that the film isn't afraid to cast its subject in a negative light, or to point out when some of work (notably her fiction and her films) fell well short of the mark, at least by the estimations of critics. But for those who come to the film with no prior knowledge of Sontag or her work, REGARDING is a less satisfying introduction than one might hope for. 2 ½ out of 4 stars.
Posted by Bob Ignizio at 5:26 PM