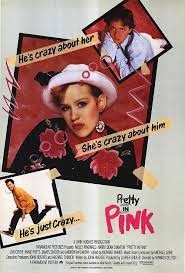 Actress Molly Ringwald and myself have a fateful tie. I don't believe you young, millennial attention-deficit/autistic kids reading the internet right now appreciate just how big an icon Molly Ringwald was in the 1980s. She made the covers of Time and Rolling Stone, acted in a series of teen-movies-with-heart scripted by John Hughes.

But here's the Charles Cassady connection. When I graduated from college during the darkest Reagan years, I had my first entertainment column - granted, only a monthly - with a magazine published for cinemas by a small New York ad agency.

Supposedly they were going to fly me out to interview the lovely and talented Miss Molly Ringwald. But, not too much longer after my return to the Cleveland area, the agency informed me long-distance that the interview was off. They'd pulled the plug on the magazine; thanks for all your work kid, but it's a bad economy, now go away, don't bother us.

Not the last time that would happen to me, and probably not a very unique story, once you get a few freelance writers talking about their career woes.

But I can't help wondering what might have transpired if that interview with Molly Ringwald actually did take place.


Perhaps after our face-to-face meeting, Molly Ringwald would have gone into a personal and professional tailspin. After disastrous, short-lived teenage marriages to Charlie Sheen and the entire rock group Metallica, she'd have been so notorious for her decadent lifestyle that the word "drugs" would fall into disuse, replaced by "Ringwald." She would have invented the `leaked' homemade sex tape, followed by the leaked homemade sex/selling-US military-secrets-to-the-Russians tape (it was the Reagan-Bush era, after all). She would have been in and out of the courts system for driver-impaired reckless operation of cars, speedboats, trains, aircraft carriers, and the Space Shuttle. When Molly Ringwald died in seclusion, of old age at 27, it would have been revealed that she had passed the preceding couple of years floating in a vat of pure heroin, the only substance her ravaged endocrine system was still able to process. Because of the massive amounts of recreational narcotics leaching from her remains, she would have to be buried in concrete next to the Chernobyl nuclear reactor, the only site on Earth that would be safe from possible trespassers.

The Molly Ringwald biopic would have starred Lindsay Lohan, Amy Winehouse and Anna Nicole Smith as Molly at different stages. It would have gotten the MPAA's new NC-24 rating; nobody under 24 allowed even to THINK about going.

And this week's revival screening of PRETTY IN PINK in Playhouse Square in Cleveland would have audiences of nearly 100 per cent junkie drag queens. All dressed as Molly Ringwald in Judy Garland-type necrophile tribute (and/or it's the official uniform of the Gay Games).


But none of that came to pass. Molly Ringwald, as best I know, is doing just fine now, and, by all appearances, seems to have matured  into a lovely author, vocalist, wife and mother, quite unlike the generally doomed former members of the Mickey Mouse Club.


And you need not fear going to PRETTY IN PINK, unless its 1986-era cliches and mannerisms get to you. Scripted by Hughes with direction by his frequent collaborator Howard Deutch, it's got almost a teenage Jane Austen-in-high-school vibe, well before that sort of thing got beaten into the ground. I seem to recall at the time the movie came out some critics complaining that there's no way American society has such a rigid class structure as is portrayed here. Meanwhile, money columnist Jane Bryant Quinn was writing that due to the US economy (Reagan years, remember?) opening greater and greater gulfs between rich and poor, Austen-like social divisions were forming over money as she had never before seen. Which just goes to show that if you want a clue about things, don't expect to find it in your newspaper's film/arts pages. Nowadays you can't even expect to find the newspaper still existing.

Setting of PRETTY IN PINK, is, for once, not Hughes' usual Chicago but an unspecified American suburban community. Andie Walsh (Ringwald) works in used-record store, dresses in vintage fashion from resale shops, and attends a high school full of wealthy, stuck-up offspring of the affluent who ostracize her. Andie herself, though brainy, beautiful, stylish, confident and respected by the teachers, hails from the seedy side of town. Her mother left (or died; it really wasn't clear to me), and her lonely father (Harry Dean Stanton) is jobless.

But Andie has a lifelong best friend and supporter in `Duckie' (Jon Cryer), a quirky, funny retro-type guy who is exactly on her level. Duckie has always assumed he and Andie would ultimately get married and be together forever. So imagine Duckie's hurt and surprise when Andie starts dating Blaine (Andrew McCarthy), one of the nicer jocks in the cabal of upper-class teen snobs. A young James Spader plays Blaine's reptilian buddy, who even warns Blaine against getting serious with a peasant such as Andie. The approaching high-school prom, and the question of who (if any) guy gets to take Andie, makes for some surprisingly potent drama.

On the downside are some calculated audience crowd-pleasers - not just the twists in the script but a heavy-handed soundtrack set-list of pop standards from the MTV era, starting with the Psychedelic Furs' title tune. And dig that bogus early digital-age notion of a school computer system; the terminals on which Andie and Blaine flirt have functions and graphics that resemble no real-life PC there's ever been. And - and this is just me - but before I beheld PRETTY IN PINK on glorious VHS I saw (and published possibly the only enthused review of) 2001's NOT ANOTHER TEEN MOVIE, featuring a cameo by Ringwald. It was one of those outlandish SCARY MOVIE-type genre parodies, this one skewering AMERICAN PIE, LUCAS, and the John Hughes/high-school canon. It burlesqued the Duckie/Blaine/Andie love triangle savagely.

(SPOILER ALERT) Poor Duckie! One of the most vivid characters in American movies to lose out in romance since Jimmy Stewart in THE PHILADELPHIA STORY (or me, but I'm not a fictional character, alas). Watching Duckie's hopes for the dreamy Ringwald slip away, I couldn't help thinking of that maniac "Virgin Killer" earlier this year in California, remember him? That movie-biz-connected young man who went on a murder spree, blaming his frustration with all the hot girls who paid him no attention? O my brothers, I tell you, if only before starting his rampage the guy had left behind a message to the effect that "THIS IS FOR DUCKIE!" I’m no fan of homicidal types being turned into folk heroes...yet, as a wounded male myself, I propose that if more psycho killers of women adopted that as a slogan, they’d get somewhat better PR regarding their atrocities. Watch this movie and tell me I’m wrong.
The very next year, Hughes and Deutch brought out SOME KIND OF WONDERFUL, a virtual carbon copy of PRETTY IN PINK, but with the genders switched. The late John Hughes bragged he could finish a screenplay in a weekend, and sometimes the results looked that way. But, along with Molly Ringwald, he made going to movies in the 1980s less sucky that it would have been otherwise, and for that we'll always be grateful. Now, if you'll excuse me, it's late at night, and I'm off to not interview Molly Ringwald again. As has been my routine for the past three decades. (3 out of four stars)

Posted by Charles Cassady Jr. at 8:49 AM