Miss Lovely (August 15th and 16th at the Cleveland Cinematheque) 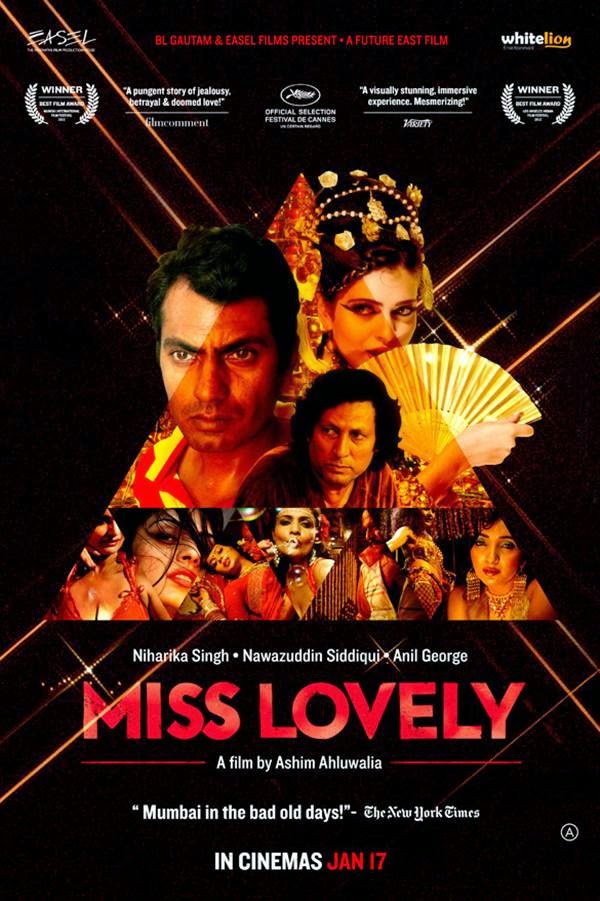 With a plot like an Indian Jim Thompson novel, MISS LOVELY is an moody noir tale set in the world of the Indian exploitation film industry of the mid nineteen eighties. Sibling filmmakers Sonu (Nawazuddin Siddiqui) and Vicky Duggal (Anil George) have a volatile relationship as it is. The underworld figures who distribute their films are making a tidy profit of which the Duggal's see only a small percentage. The brothers attempt to sell directly to theaters themselves, but the mobsters find out. Luckily for the Duggals they get off easy with a warning and a beat down, but they're also under pressure to deliver more product soon, and can't afford to screw up again. Meanwhile, Sonu longs to make a classy romance film, and when he spies the lovely and seemingly innocent Pinky (Niharika Singh) he's not only certain he's found his leading lady, he's utterly, obsessively smitten. But when Vicky sees his brother with Pinky and confronts her, it soon becomes clear that the girl isn't quite what she seems.

That's the main story, anyway, but the film frequently wanders off on fascinating tangents, casually exploring various elements of the wild world of outlaw cinema in which it is set. Not only do the snippets of films supposedly shot by the Duggal's look and feel authentic, so do the various behind the scenes vignettes. Not unlike Paul Thomas Anderson's BOOGIE NIGHTS, MISS LOVELY not only follows the story of its main characters, but the story of the rise and fall of this industry as new technologies make the production of actual films to surround the sex scenes with obsolete. It's obvious that director Ashim Ahluwalia, who co-wrote the screenplay with Uttam Sirur, has a real passion for this world. As it turns out Ahluwalia originally intended to make a documentary on the subject, but none of his interview subjects would appear on camera for fear of being arrested.

As much as Ahluwalia loves exploitation films, his style shows the influence of more artistic fare. There's a hazy, dreamlike quality to the film, and it unfolds at a confident, unhurried pace. I didn't mind the lack of traditional crime movie action, as the slow build to a horrific act of violence feels right. The film's overall vagueness and fade-out ending are more problematic, though. The subject matter is so fresh and engrossing, it's a shame the central narrative doesn't have a stronger payoff. 2 1/2 out of 4 stars.
Posted by Bob Ignizio at 3:09 AM