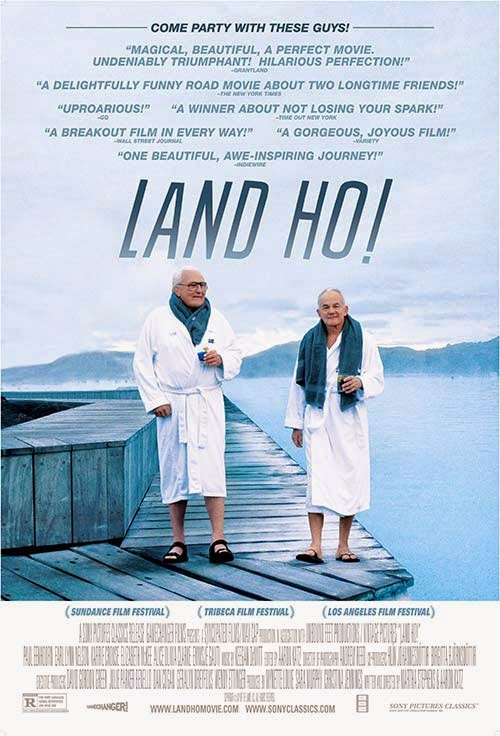 LAND HO!, a modest independent film written and directed by Aaron Katz and Martha Stephens, evokes memories of many a buddy road-trip movie — two mismatched pals take off together, and hijinks ensue — but with some noteworthy qualities of its own. First there is Iceland, photographed in all its rugged, explosive beauty by Andrew Katz. And then there are the fine actors Earl Lynn Nelson and Paul Eenhoom, who play septuagenarian former brothers-in-law who try to “get their groove back” with a trip to Iceland, visiting museums, discotheques, spas and campsites, bonding and clashing along the way.

Mitch (Nelson) and Colin (Eenhoom) are a study in contrast. Mitch, a widower with a booming Southern drawl reminiscent of Lyndon Johnson, is unbridled and uncouth. He smokes pot and says whatever he thinks: “Like angels pissin' on your tongue” is how he describes a savory dish he's cooked; discussing movies, he says he liked Sleepless in Seattle, though Meg Ryan “didn't have no tits.” Colin, an Australian-born retired bank manager whose second marriage has just broken up, is more reserved. Mitch's boisterously vulgar personality makes it hard to believe he's a retired surgeon, though in real life, Earl Lynn Nelson is a plastic surgeon and reportedly very similar to the character of Mitch.

Mitch surprises Colin with tickets for a trip to Iceland, ostensibly to cheer up his former brother-in-law. Colin reluctantly agrees, and they jet to Reykavik, Mitch promising “fucking fantastic lobster and gorgeous broads.” They spend time at an art gallery, where Mitch makes lewd appraisals of the nude portraits, dine and disco with Mitch's younger second cousin Ellen (Karrie Crouse) and her friend Janet (Elizabeth McKee), who are traveling through Iceland, smoke pot at Mitch's behest. They travel to The Golden Circle, where they witness the eruption of a geyser (which Mitch, of course, likens to “a big come shot”). When Mitch leads them to get lost in the dark at a rugged campsite, Colin angrily protests his friend's domineering ways. “It always has to be your way!” Mitch, who can't seem to sit still and enjoy a quiet moment, insists, “Life is too short to sit still.”

The movie has a loose, easy feeling, and many scenes seem at least partly improvised. The fact that some of the actors are relatively unknown adds to the film's naturalistic tone. This is particularly true of the women characters — Ellen and Janet seem like real people, as does Nadine (Alice Olivia Clarke), the lovely black Canadian traveler with the infectious laugh, who shares a tender evening with Colin.

Katz and Stephens' screenplay hints at more serious themes — what doomed Colin's marriage, why Mitch had to retire, how it feels to be over seventy and contemplating the mortal abyss. We learn that Colin was once an orchestral French horn player, who gave up music to work in a bank, and that Mitch didn't buy the tickets to Iceland just for Colin's benefit.

But the film doesn't plumb great depths; there are no profound moments, which is probably a good thing, or would be if the filmmakers had resisted the urge to amplify Mitch's “outrageous” behavior and sexually flavored palaver — a little of this character goes a long way. (Must all old people in movies talk crudely for laughs?) I might also have preferred less contrived whimsy, such as the two elderly pals embracing and dancing on the beach to the soundtrack songs (“Big Country”), but there are, god knows, far worse ways to spend an hour and a half than watching this unpretentious little duet. 2 and 3/4 stars out of 4.