Horses of God (August 29th and 30th at the Cleveland Cinematheque)

[HORSES OF GOD screens Friday August 29th at 9:10 pm and Saturday August 30th at 7:05 pm at the Cleveland Cinematheque.] 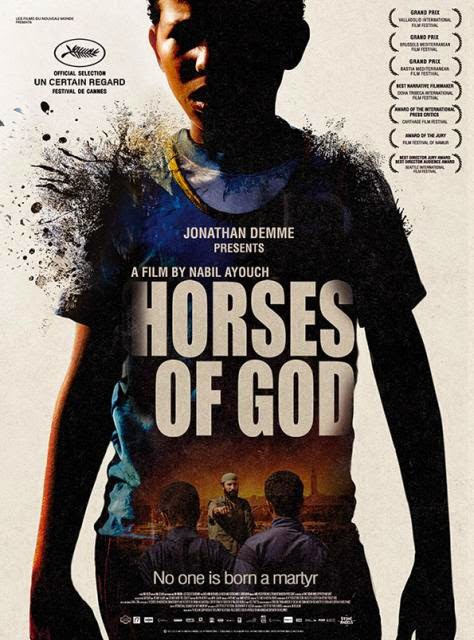 Taking the Cassablanca bombings of 2003 as its starting point, HORSES OF GOD tells the story of two brothers who wind up becoming suicide bombers. We meet the brothers as young boys. Tarek (Abdelhakim Rachid) is the younger of the two, an avid soccer fan whose nickname Yachine comes from his favorite player. Yachine's older brother Hamid (Abdelilah Rachid) is more focused on taking care of their family and protecting his younger brother from bullies. The boys live a hard life in the slums and frustration naturally builds. That frustration bursts out one day when Hamid throws a rock at a police officer and winds up serving two years in jail.

While in jail Hamid becomes radicalized, and upon release returns home and brings his brother and lifelong friend Nabil (Hamza Souidek) into the fundamentalist fold. Hamid, tired of being in his brother's shadow, quickly becomes the more fervent of the two, winning favor from the group's Imam. As it becomes clear that they are to be made martyrs, Hamid tries to save his brother, but it may be too late.

Based on the novel of the same name by Mahi Binebine, HORSES OF GOD is a finely acted and directed film that shows a fictional yet believable portrait of a group of poor but hopeful kids who turn into terrorists willing to give their lives for their cause. It doesn't cross the line into apologia, but it does make clear the various societal forces that play a role in creating the kind of hopelessness that can lead some down this path, a path that ends in tragedy for all involved.

There's no doubt that this is a heavy film to watch, and one is reminded of something director Michael Hanneke said of his film FUNNY GAMES: “Anyone who leaves the cinema doesn't need the film, and anybody who stays does.” This is not a film to be watched for entertainment in any traditional sense, but one that seeks to impart an understanding of its subject to those who lack it. If you already get that terrorism and suicide bombers are in the wrong, but that there are real world issues that lead to their creation which, if changed for the better, might serve to reduce the number of young people who feel they have no options but to resort to violence, you may well be one of those people who doesn't particularly need the film. 3 out of 4 stars.