Going Attractions: The Definitive Story of the American Drive-In Movie (August 8th at the Cleveland Cinematheque)

[GOING ATTRACTIONS: THE DEFINITIVE STORY OF THE AMERICAN DRIVE-IN MOVIE screens Friday August 8th at 9:45 pm at the Cleveland Cinematheque. Filmmaker April Wright will answer audience questions after the screening.] 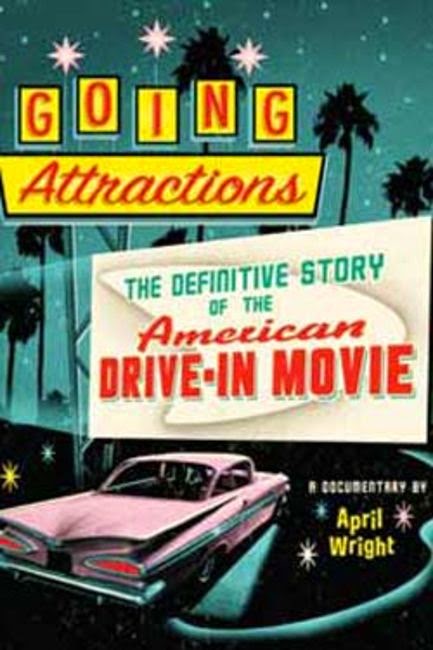 In detailing the history and cultural impact of its subject, GOING ATTRACTIONS: THE DEFINITIVE STORY OF THE AMERICAN DRIVE-IN MOVIE does a pretty good job living up to its subtitle. If it falls short, it's only because director April Wright recognizes that sometimes you have to sacrifice comprehensiveness in order to make a movie that flows well and keeps the viewer's attention. But really, there's not much of importance that gets left out.

The movie starts by detailing the origins of the drive-in, and to be fair much of this material will be familiar to anyone who has seen the earlier drive-in documentary DRIVE-IN MOVIE MEMORIES. Once GOING ATTRACTIONS gets that out of the way, however, it starts to take on more of its own personality. GOING devotes time to such quirky aspects of drive-in culture as the way the screens were built and the inherent safety issues that went along, the guys who made those goofy concession stand ads, and the sort of disreputable indie films that dominated drive-in screens in the sixties and seventies when teens and young adults replaced families as the primary audiences at drive-ins. Wright doesn't even shy away from talking about how many drive-ins fell into playing XXX films in the late seventies/early eighties (something I was well aware of as a kid from scanning local newspaper ads in the Akron Beacon Journal).

Wright traveled the country in order to get as complete a picture of the drive-ins history as possible. While there isn't a separate section on each state, the film does try to let drive-in owners and patrons from many different regions give their own unique perspectives on the drive-in phenomena.Of course, there's no way an hour and a half film can contain everything that might be of interest in such a rich topic as drive-in history. But for a film that tries to cover all aspects of the drive-in without becoming unwieldy, GOING ATTRACTIONS is about as good as one could hope for. 3 ½ out of 4 stars.
Posted by Bob Ignizio at 12:00 AM