Go Down Death (August 21st and 24th at the Cleveland Cinematheque)

[GO DOWN DEATH screens Thursday August 21st at 8:40 pm and Sunday August 24th at 8:25 pm at the Cleveland Cinematheque.] 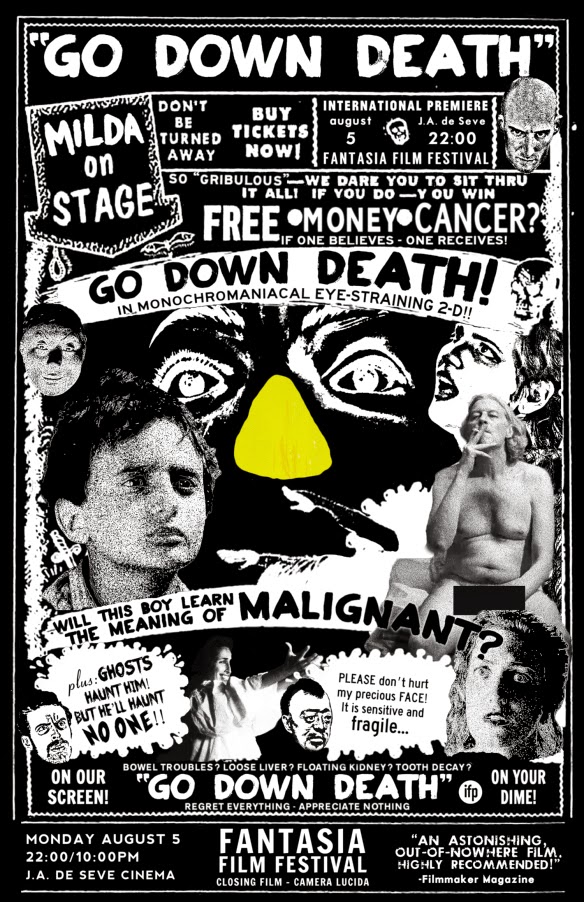 Sometimes you just have to throw up your hands and say, “I don't get it.” Sure, on some level, one will “get” that GO DOWN DEATH is a surreal medication on mortality, at least for the first hour and 10 minutes before it abruptly shifts gears into something completely different. Exactly what writer/director Aaron Schimberg is trying to say about the subject, or why we should care, is more difficult to pin down.

The basic concept is that this film is an adaptation of a six page pamphlet written by (fictitious) folklorist Jonathan Mallory Sinus. There's a little boy who digs graves talking to his doctor, who transforms from one actor into another. There are soldiers running around in the woods. There's a brothel populated by all kinds of odd characters including an amputee who feels that losing his leg made him more his true self.

You don't have to be a film expert to recognize that Schimberg is working in a similar vein here to Guy Maddin and David Lynch, more Maddin than Lynch I would think. Like those directors, he creates a tone of general low key weirdness, and the faux historical conceit is similar to Maddin's MY WINNIPEG. The black and white cinematography and phantasmagorical visuals are captivating at first, but after a while one starts to realize the film isn't really going anywhere.

Given that there are so few films willing to go out on a limb artistically as this one does, it's hard not to at least admire the singular vision of GO DOWN DEATH. Just because so many films play it so safe is no reason to start grading on a curve, though, especially when this year has already seen a far more satisfying surrealist masterpiece in the form of Alejandro Jodorowsky's THE DANCE OF REALITY. GO DOWN DEATH is ambitious and visually captivating like DANCE, but it's also frustratingly opaque and self absorbed. 2 ½ out of 4 stars.
Posted by Bob Ignizio at 1:46 AM