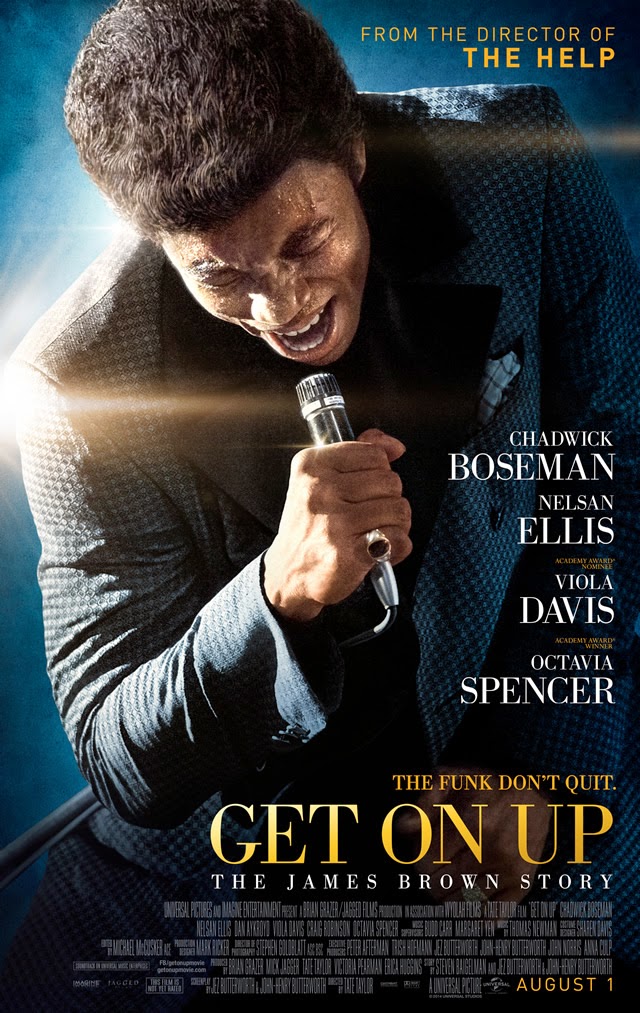 GET ON UP tells the life story of James Brown, Mr. Dynamite, the Godfather of Soul. The film covers a large span of Brown's life, giving us the man's greatest hits both in life and in song in a non-chronological manner.

The film stars Chadwick Boseman who last played Jackie Robinson quite nicely in 42. Boseman again seems comfortable in the skin of an icon, but Brown couldn’t be more different than Robinson. Both were showman and both defiant, yes, but James Brown has an almost uncontrollable energy that Boseman helps bring to life with great ease. 42 was Boseman’s vehicle, and GET ON UP is no different, resting comfortably upon the actor's shoulders.

Director Tate Taylor (THE HELP) tries many things to keep the film feeling frantic and fresh with mixed results. There are some moments of fine filmmaking in which James Brown’s energy guides the film's course, particularly the first half. The musical performances often feel as electric as what one would think a James Brown show would feel like, but the movie too often relies on common themes seen in other biopics.

The anecdotes of Brown's life are sometimes highly amusing, but can take a darker turn in his dealings with those closest to him - he had a violent relationship with his wife and emotionally abused band mates and friends. GET ON UP also helps you gain an appreciation for Brown’s hardships during his childhood, certainly one cause of his coldness towards others in his adult life.

Most musical biopics are made because music has always been culturally cool and biopics always seem to have an audience. Regardless, musical biopics always seem kind of lame compared to whatever icon is being displayed. The engaging WALK THE LINE (Johnny Cash) and THE BUDDY HOLLY STORY fit the bill as pretty good biopics, but others leave much to desired, like the utterly uncool THE RUNAWAYS (Joan Jett) and THE DOORS.

GET ON UP succeeds in engaging the audience, even if it doesn’t always feel as original as you might hope.

Mick Jagger (The Rolling Stones), a friend and fan of Browns, produced the film. Considering our lead character and the producer (one of the most intriguing lead singers of all time), one might expect GET ON UP to be a wilder affair. It has its moments, but alas, the need for an audience results in a PG-13 rating and the film skimps on going full out. A shame as this could have been a crazier ride.

Did James Brown's story need to be told? I think so. I walked away with a new appreciation for the man. But the true worth of the film is sharing Brown’s genius compositions with a new generation. His impact on culture and music is undeniable. I suppose if Frankie Valli gets his own Broadway show and major motion picture, the Hardest Working Man in Show Business has every right to have his story told. 3 out of 4 stars
Posted by Joseph Anthony at 12:01 AM