Filth (August 22nd and 23rd at the Cleveland Cinematheque) 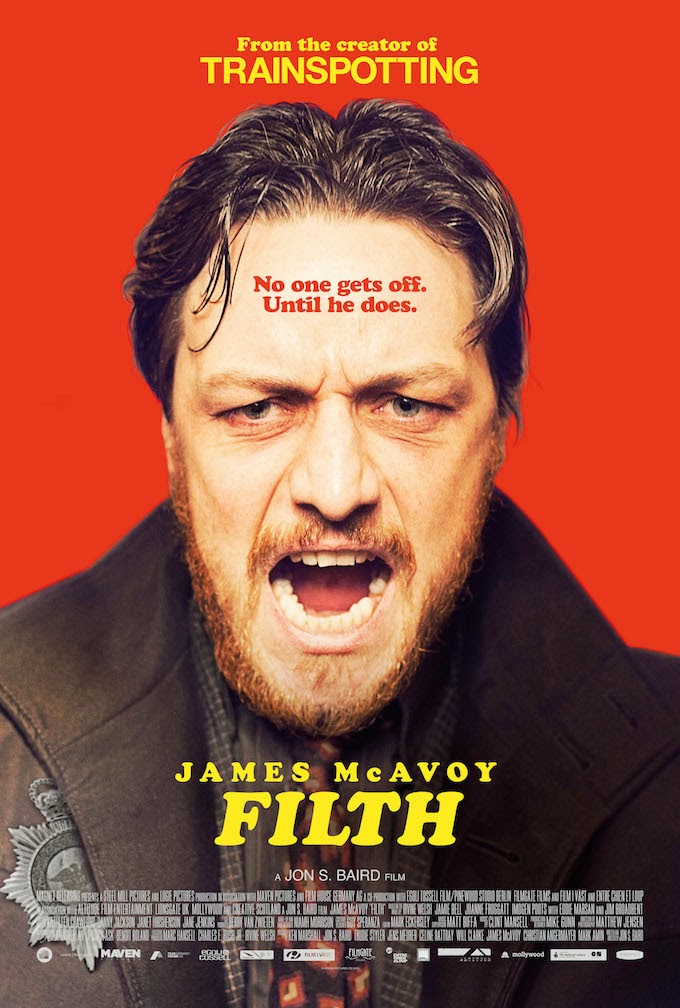 If Alex from A CLOCKWORK ORANGE had grown up to become a Scottish police detective, he might have been James McAvoy’s bad news cop Bruce Robertson in FILTH. As seemingly berserk, unhinged and out of control as its drug-and-alcohol-fueled protagonist, Jon S. Baird’s cinematic translation of Irvine Welsh’s novel lacks the formal and stylistic rigor director Danny Boyle brought to TRAINSPOTTING, a 1996 Welsh adaptation. The influence of fabulist extraordinaire Terry Gilliam is so pronounced, Baird could have titled his movie, “Fear and Loathing in Edinburgh.”

What little plot there is revolves around Bruce’s bid for a promotion to chief inspector. Because he’s unethical and underhanded as well as clinically bipolar, Bruce’s campaign of terror involves slandering and sabotaging his colleagues at every turn. (Jamie Bell, Gary Lewis, Emun Elliott and a shockingly good Imogen Poots play fellow cops.)

There’s also an ongoing murder investigation (which ultimately proves as irrelevant to the audience as it is to Bruce), frequent trips to a shrink (an amusing Jim Broadbent) who doles out psychoanalytic bromides to Bruce along with lithium, and Bruce’s cuckolding of his best (only?) friend, mild-mannered accountant Bladesy (Eddie Marsan). (A reliably droll Shirley Henderson plays Bladesy’s hot to trot missus.)

The entire movie feels like a bad acid trip which was probably the intent since the only POV we’re allowed emanates from Bruce’s warped mind. Images are blurry or downright blurred; action is speeded up or slowed down; hallucinations predominate. After awhile, though, the whole thing simply becomes exhausting. There’s only so many times an actor can pop up wearing an animal mask before even that playful bit of dime store surrealism gets old. By the time it was over, I felt as if I had been on a Bruce-ian bender myself.

Fortunately, McAvoy is up to the demands of his bonkers role, thoroughly dominating every frame with a sensational, utterly fearless performance. While McAvoy has usually been cast as buttoned-down types, there’s always been a hint of menace/malice lurking beneath his placid ginger schoolboy surface. In FILTH, he’s finally allowed to cut loose (and then some), and the effect is tonic. You almost feel guilty, or at least mildly ungrateful, for not enjoying yourself as much as McAvoy clearly is.

Baird should thank his lucky stars for having an actor as dedicated and unstintingly brave as McAvoy to headline his film. FILTH would be well-nigh unimaginable, and quite possibly unbearable, without him. Thanks to McAvoy, it nearly qualifies as a must-see. 2 1/2 out of 4 stars..