Elena (August 28th and 29th at the Cleveland Cinematheque) 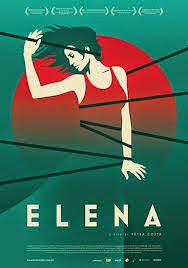 I’m not sure whether ELENA falls more into the camp of art or art therapy. addressing the tragic issue of major depression and suicide - as it has impacted her own family - Petra Costa's feature is a strikingly lyrical visual poem, blending freshly shot, surreal material with family home movies and low-resolution archival videos.

The filmmaker's narration is a wispy open letter read together late sister Elena Costa, a Brazilian stage actress and occasional model. Both Petra and Elena were daughters of a pair of card-carrying 1960s Brazilian communists, and, like a lot of things on the political Left, the marriage failed. This seemed to wound Elena most deeply, and she withdrew into performance, earning media notices at home for her theater work.

Elena made the decision to relocate to New York City for further theatrical studies and serious pursuit of her acting/modeling career. But after some initial excitement, in which the highlight was meeting Francis Ford Coppola shooting THE GODFATHER PART III (bad sign right there), nothing much developed in Elena’s NYC career. The girl battled seesawing weight and mood swings and drug/alcohol abuse.

Petra and their mother eventually joined Elena in the Big Apple, but the older sister's emotional decline was irreversible. Late in the film  Petra reveals that a history of suicidal depression runs in the female side of her family, along with a jones for acting, art and film as a form of escape/release. Though...it’s a pretty ineffective self-medication, if you ask me, given how much the arbitrary ups and downs of showbiz seemed to play a negative role in Elena’s fate. Maybe Robin Williams’ too; of course that’s just my bitterness surfacing.

Bereaved sister Petra’s film, though, is the furthest thing from a talking-head, white lab-coat piece, turning fuzzy old footage and soft-focus new footage into arresting imagery (don’t ask me what Adobe AfterEffects filters were used; I’m not hep to that much) and editing it to dream-reverie rhythms. I must confess to having mixed feelings about ELENA, a film on suicide, made by someone so personally hurt, looking like a cool perfume ad/extended music video. Are we indulging in voyeurism hearing Elena’s sad story. Or does the technique add distance and dignity? Or does it romanticize self-destruction? For me it didn’t much sway a notion I’ve had of longstanding: show folk are generally unhinged, so mamas, don’t let your kids grow up to be actors. Dialogue is primarily in English, with some subtitled Portugese. (2 3/4 out of 4 stars)

Posted by Charles Cassady Jr. at 1:10 AM