It's time once again for the Indie Gathering, a local festival by and for aspiring northeast Ohio filmmakers, actors and crew, held in Hudson. At one of the early Indie Gatherings I myself was invited to speak. My recall is probably imperfect, but I do believe I walked to the front of the auditorium and told the assembled crowd something like this:

But I do know this: that I told the crowd that they shouldn't just listen to my clumsy, halting words. You mutants are all about watching things on screens, right? You want a want a documentary film that would tell you all about the struggles of aspiring film wannabes? One that would either scare you straight or send you continuing on the road to damnation?

I named that film, Doug Block's THE HECK WITH HOLLYWOOD! And, much as I am probably banned from the Indie Gathering, from Hudson, from most forms of human companionship, I'll name it again here. And match it up with a possible successor.

Doug Block is now a well-known name and educator on the nonfiction-film front. But he was an raw newcomer when he did one of the earliest - and still best - cautionary looks at the frustrations of guerilla cinema, in 1991. THE HECK WITH HOLLYWOOD really caught the zeitgeist with the fevered indie-film scene of the late-1980s, as Spike Lee's breakthrough B&W, do-it-yourself phenom SHE'S GOTTA HAVE IT gave too many tyros a sense that they too had a shot at big studio deals and magazine-cover immortality.

Block's focus in the short feature is on three disparate first-time filmmakers. THWH's brilliance is not dwelling on crazy on-set hijinks a la the later AMERICAN MOVIE, but on the travails faced by the trio of protagonists after their features wrapped. Ted Lichtenheld shot a mild romantic drama, PERSONAL FOUL, in economically depressed Rockford, Illinois. The good news: he hired recognizable actors David Morse and Adam Arkin. The bad news is that the low-key picture did not have many other perceptible audience draws (unless one is crazy about Rockford, Illinois).

Gerry Cook's comedic ONLY A BUCK, filmed in Spokane, Washington, actually looks cool, but with no name celebrities, and lacking licensing rights to all the well-known music the filmmakers used, it's deemed charming but practically unreleasable. Its upbeat creators do wild stunts like disguising promo kits as free Domino's pizza, or peddling the movie cross-country from a custom RV.

Jennifer Fox's war documentary BEIRUT: THE LAST HOME MOVIE actually gets picked up, at least in an art-house/museum circuit. But Fox is unhappy over just about everything her distributor did with it. Typical self-centered filmmaker arrogance, a tired old exec from self-same distributor responds, looking forward to retirement from this dirty business.

Deep in they debt, the artists schlep from one film market to another, facing cold rejection from jaded showbiz reps. In one great moment, an old screening-room vet says that many filmmakers can't comprehend that most nobody wants to see their stuff. And the same thing goes, he tells Doug Block, for this little docu-movie you're making right here. Ouch that's cold!

Of the three subjects, only Jennifer Fox has thus far gone on to bigger things, producing the George Clooney drama SYRIANA among other projects. The others...who knows? And one has the sickening feeling there a lot more dreamers like them, consigned to obscurity with their unreleased movies piled up in their closets (or hard drives) THE HECK WITH HOLLYWOOD! ought to be required viewing for anyone, and did get a VHS release on the small Direct Cinema label.

Just this year, however, in time for the Cannes Film Festival, HBO released to video another bitter valentine to the movie industry, this one with plenty of star power (even bigger names than Adam Arkin). So I'll throw that one for the Indie Gathering attendees also: James Toback's SEDUCED AND ABANDONED.

The well-educated Toback came along with the same generation of 1970s "movie brats" that included Francis Ford Coppola, Martin Scorsese, George Lucas, Steven Spielberg, Paul Schrader and Peter Bogdanovich. Toback has yet to enjoy a blockbuster audience hit, just critically praised and culty pics like the Harvey Keitel crime-character study FINGERS. Maybe it's some kind of divine compensation for that - or decent plastic surgery - but Toback in SEDUCED AND ABANDONED looks a lot more hale and well-preserved than his peers.

In SEDUCED AND ABANDONED (a title borrowed from a Lina Wertmuller film), to an all-Shostakovich soundtrack, Toback teams up with Alec Baldwin and HBO Films to explore the money-rich, artistically bankrupt culture of the Cannes Film Festival and Market, using a sort of non-starter prank, similar to Michael Moore trying to meet the president of General Motors in ROGER & ME. 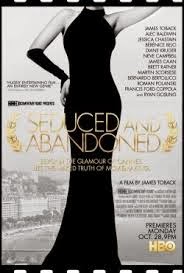 Amidst a Riviera climate of superstar hype, paparazzi, and immense wealth, Baldwin and Toback pretend to float an awful-sounding, hard-sell movie idea - a remake and update of Bernardo Bertolucci's LAST TANGO IN PARIS set in Iraq as a left-wing political-sexual thriller, starring Baldwin paired with Neve Campbell. Naturally, investors refuse funding this box-office poison, with varied degrees of bottom-line tactlessness as they cite the absence of bankable stars or car chases. Forget his success on TV in 30 Rock or in movies such as THE AVIATOR. Alec Baldwin - as far as the action-addicted foreign mouth-breather audiences are concerned - was only worth the cost of a ticket when waging submarine warfare with Sean Connery in THE HUNT FOR RED OCTOBER.

Ancillary benefits in this hopeless quest are Toback's Q&As with Cannes veterans and ingenues, ranging from Bertolucci and James Caan to Diane Kruger, Ryan Gosling and Diablo Cody. Martin Scorsese and Roman Polanski have warm memories of their career breakthroughs at Cannes Film Festivals past, but they join Francis Ford Coppola in the general opinion that the halcyon days of anyone underwriting a MEAN STREETS, a TAXI DRIVER or a CHINATOWN are over.

Famous gossip reporter and jet-set author Taki Theodoracopulos (even he gets hit up for money) complains that Cannes of yesteryear is gone; now it's overrun by corrupt Russian oligarchs. The coin the billionaires do want to spend is put into exploitable sure-thing investments such as superhero comic-book adaptation sequels (yes, that's kind of a "dis" for the shot-in-Cleveland AVENGERS, deal with it).

So, no LAST TANGO IN PARIS remake. And yet, for all that, these people still love cinema, dammit, for its illusion of immortality and the rare triumph when a worthwhile picture gets made. They think it's worth it. So might you. But allow me to beg to differ - or at least ask you to watch these two documentaries and make up your minds then.