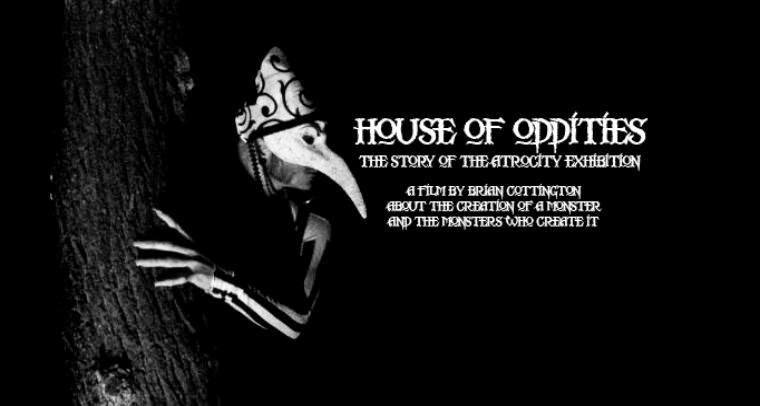 The Pittsburgh produced documentary film, “House of Oddities: The Story of the Atrocity Exhibition” by award winning Director Brian Cottington has placed 2nd in the Feature Documentary Competition and will be screened at the International Indie Gathering August 16th at 10:35pm at the Clarion Hotel and Conference Center - Hudson, OH.

PITTSBURGH, PA- July 8, 2014- A Pittsburgh based documentary about the annual underground dark art festival, The Atrocity Exhibition, makes its Ohio premiere this coming August. “House of Oddities: The Story of the Atrocity Exhibition” by award winning Director Brian Cottington, will be screened at the International Indie Gathering in Hudson, OH that takes place from August 15- 17. The film was also awarded by placing 2nd in the Feature Documentary Competition. This is the first feature and first documentary by Brian Cottington who previously took home the Best Director in a Feature Film Award from this past May’s 1st Annual Horror Realm Independent Film Festival.

“House of Oddities” tells the story of one of the most bizarre and artistically diverse events held in Pittsburgh; the annual Morose & Macabre Atrocity Exhibition held at the Rex Theater in Pittsburgh’s South Side now in it’s 6th year. Filmed over the course of 2013, Brian Cottington takes a behind the scenes look at the various performance artists, burlesque entertainers, side show artists, and local fine artists who encompass a 360 degree themed living art exhibition. “House of Oddities” also manages to expose the human side of people who on the surface appear as “freaks” and how they can come together as a family for one night to put on a fantastic celebration of the macabre.

About “House of Oddities”

“House of Oddities” is a feature length documentary that details the behind the scenes madness that goes into creating the 360 degree art collaborative show, Morose & Macabre’s Atrocity Exhibition, now in it’s 6th year. Directed by Brian Cottington and Cinematography by Timothy Roberts the movie is set for a Fall 2014 DVD release. Theatrical screenings will be available across the country through theatrical on demand service, Tugg.com. You can follow “House of Oddities” on their website, www.houseofodditiesmovie.com, www.facebook.com/HouseOfOdditiesMovie, and @OdditiesFilm on twitter.

About The International Indie Gathering

We are the Alternative for Independent, Underground and Experimental Film and Video. The "Indie" Gathering Film Festival exists to showcase the independent filmmaker. Our mission is to inspire and encourage filmmakers through a competitive showcase. Filmmakers participate in their screenings and after the films speak with audience members who seek a closer look into the creative process.

With competitions for films, scripts, film scoring, special FX makeup, stunts/fight scenes, and acting/monologue, The Indie Gathering has a place for everyone! The weekend consists of three screening rooms, a convention/vendors room, film seminars/lectures, competitions, networking parties and more! If you are involved in, or interested in, any aspect of filmmaking, this festival is for you.