A Summer's Tale (August 15th and 16th at the Cleveland Cinematheque) 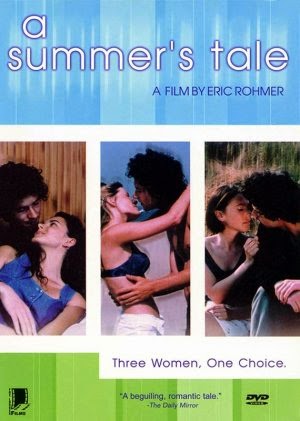 Summer may be winding down, but it’s not too late for A SUMMER'S TALE, a posthumous gift from French New Wave master Eric Rohmer premiering this weekend at the Cleveland Institute of Art Cinematheque. Although made in 1996, Rohmer’s film is just now receiving a (very) belated domestic release. I have no idea how or why it took so long to reach American shores, I’m just grateful to finally have the chance to see one of the greatest of all director’s most purely enjoyable movies.

The formal simplicity of Rohmer’s films—essentially a series of elegantly composed medium shots connected by the slenderest of narratives—belies the fact that there’s so much going on beneath the surface of his (ever loquacious) characters. It’s cinema stripped to the basics without ever seeming remotely punitive or even austere. Instead, there’s a buoyancy and joyousness to Rohmer’s minimalism that make his movies so intensely pleasurable.

Like 1986’s SUMMER and 1988’s BOYFRIENDS AND GIRLFRIENDS, A SUMMER'S TALE involves young people talking and flirting, flirting and talking then talking some more. Eventually they all wind up talking themselves into circles, desperately trying not to fall in love. But since Rohmer was probably the most romantic filmmaker who ever lived, it’s a Sisyphean task every time.

The film’s protagonist, college student Gaspard (Melvil Poupaud of Arnaud Desplechin’s A CHRISTMAS TALE), is spending his holidays in a quaint Breton resort town that’s more Geneva-on-the-Lake than Club Med. A studious type—he’s studying math, although what he’d really like to be is a musician—Gaspard claims to be waiting for his on again/off again girlfriend, Lena (Aurelia Nolin), to join him. In the meantime, and to help pass the time, he strikes up a fast friendship with Margot (the luminous Amanda Langlet), a fellow student who’s spending the summer waiting tables at her aunt’s beachside restaurant. Margot also has an absentee significant other (her boyfriend is studying abroad), so things between her and Gaspard remain strictly and safely platonic.

When Lena—who until now has seemed like either a figment of Gaspard’s imagination or Rohmer’s MacGuffin—finally materializes, it’s almost deflating because we already know that Margot is his true soul mate. The movie’s principle suspense lies in waiting for Gaspard to realize that nugget of wisdom for himself.

Rohmer always seemed to favor text (i.e., dialogue) over images, yet he was truly among the most supremely tactile filmmakers who ever lived. Watching Gaspard and Margot walk and talk on the beach, you can practically smell the salt in the sea air and feel the sand between your toes. The sensation is both uncanny and deeply seductive. It’s like being on vacation without ever leaving your theater seat.

Rohmer’s films were truly unlike any other director’s, past or present. They were also, in their inimitable, exacting fashion, pure cinema. A SUMMER'S TALE is a balm, a restorative and, for me anyway, an exhilarating reminder of why I ever “lost it at the movies.” 4 out of 4 stars.

Posted by Milan Paurich at 3:15 AM