Watermark (July 11th and 12th at the Cleveland Cinematheque) 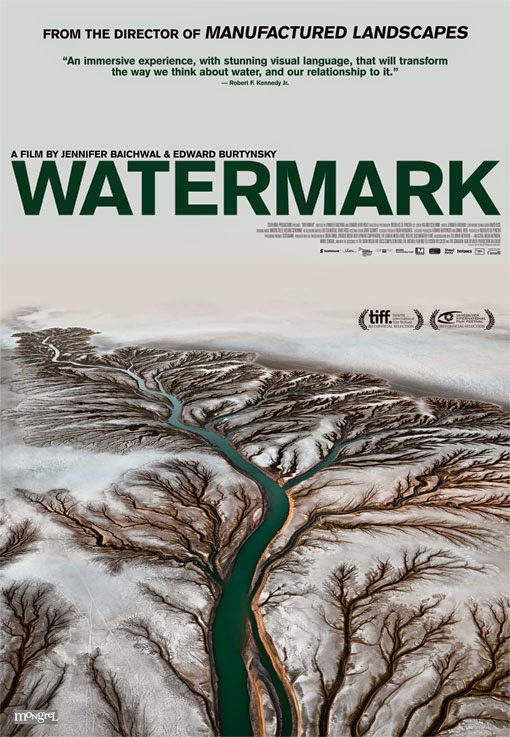 Edward Burtynsky's and Jennifer Baichwal's WATERMARK is what can be described as an “impressionistic documentary.” Canadian photographer Burtynsky presents stunning, high-definition views from around the world, all related to the theme of water. The sites include floating abalone farms off China's Fujian coast, the arid desert where the Colorado River once flowed, water-consuming leather tanneries in Dhaka, Bangladesh, the U.S. Open of Surfing in Huntington Beach, California, the construction of the world's largest arch dam in China, the Bellagio water show in Las Vegas, and the watersheds of Northern British Columbia. We also visit with a team of scientists studying climate change by drilling ice cores into the Greenland Ice Sheet


There is no clear overarching narrative; accumulated effect of this photographic exercise is meant to illustrate man's relationship with water and the threats to it by industrialization “How does water shape us, and how do we shape it?” the film asks, but never really attempts to answer. The film is more clearly about the work of Burtynsky, a Canadian fine-arts photographer known for large-format landscapes, with a particular interest in how those landscapes are changed by industry. Burtynsky was the subject of Baichwal's 2007 documentary Manufactured Landscapes. This film is part of Burtynsky's five-year project called “Water,” and we see him carefully selecting images for a German-published book of his H20 photographs.


The film touches upon some interesting stories, but never develops any or connects them to a central theme. There is the elderly woman in Lone Pine, California, showing where the river once flowed and recounting how she and her family were threatened with having their house burned down when the government acquired the land for the Los Angeles aqueduct.A young rice paddy worker in China is a "waterguard," who describes the need to protect families from having their precious water stolen. We visit India and witness the massive pilgrimage made every 12 years to the Ganges River by Hindis, who bathe en masse to cleanse themselves of sinful thoughts and deeds.

The images taken by Burtynsky's digital Hasselblad are never less than grand — aerial shots of a river in British Columbia are especially impressive — but by themselves do not make a coherent narrative. Some of the sequences have no clear relevance to the film's environmentalist theme, though they come under the general "water" rubric. The surfing tournament relates to water, but doesn't threaten it, and the Bellagio fountain, in reality, uses recycled water in drought-plagued Las Vegas. The directors have a maddening habit of plunging the viewer into scenes that only later are explained by some narration.


The filmmakers assume that there is little need for narration, but a picture, no matter how breathtaking, is not always worth a thousand words. If your intention is to make a filmed meditation on water, an hour and a half of beautiful footage of water sites, set to music, might be appropriate (if overlong). But if your theme is the threat of industrialization to the global water supply, you need a coherent narrative. There are several recent documentaries that discuss the water problem: LAST CALL AT THE OASIS is particularly good. WATERMARK is visually brilliant and meditatively beautiful, and for some audiences, that may be enough to recommend it. 2 out of 4 stars.