[VENUS IN FUR opens in Cleveland on Friday July 18th exclusively at the Cedar Lee Theatre.] 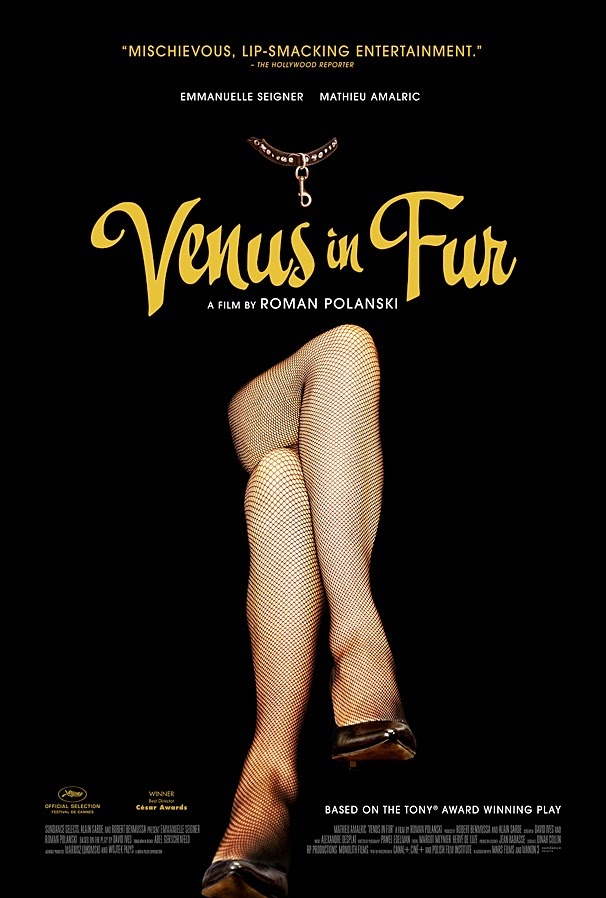 Adapted by Roman Polanski and David Ives from Ives' play of the same name, VENUS IN FUR is a decidedly minimalistic affair. Thomas (Mathieu Amalric) is trying to cast the female lead in his new play, an adaptation of the erotic classic Venus in Furs. Everyone he's seen so far has been horrible, and he's about to head home when Vanda (Emmanuelle Seigner) bursts through the theater doors like a whirlwind begging for a shot. She's such a force of nature that Thomas grudgingly agrees to read with her, even though he's certain she'll be just as bad if not worse than everyone he's seen already. Except it turns out Vanda is considerably more than she seems, and as the two work their way through the play roles get swapped and the balance of power shifts.

The two actors are fantastic; Amalric more subdued and naturalistic, Seigner intentionally over the top one minute, then coming down to earth to deliver a particularly pointed barb the next. The dynamic between them is enough to sustain interest for a while, but by the halfway mark I found myself wishing the film would just get on with it.

Polanski has managed to make films with small casts and minimal locations interesting in the past. As recently as 2011's CARNAGE he used those constraints to his advantage to create a sense of claustrophobia and tension that complimented that film's themes to a tee. VENUS IN FUR, however, simply feels flat and stagebound.

The themes of sexual power in VENUS IN FUR are familiar territory for the director, going as far back as his debut feature A KNIFE IN THE WATER (1962) and coming to the fore in a pair of mid nineties films, BITTER MOON (1992) and DEATH AND THE MAIDEN (1994), so one can see why the material would have appealed to him. Unfortunately there's just not as much depth here as in those other films, and VENUS winds up feeling like a lightweight intellectual exercise with a predictable twist that thinks it's far more clever and edgy than it really is. 2 out of 4 stars.
Posted by Bob Ignizio at 12:00 AM