The Galapagos Affair: Satan Came to Eden (July 18th and 20th at the Cleveland Museum of Art)

[THE GALAPAGOS AFFAIR: SATAN CAME TO EDEN screens Friday July 18th at 6:45 pm and Sunday July 20th at 1:30 pm at the Cleveland Museum of Art.] 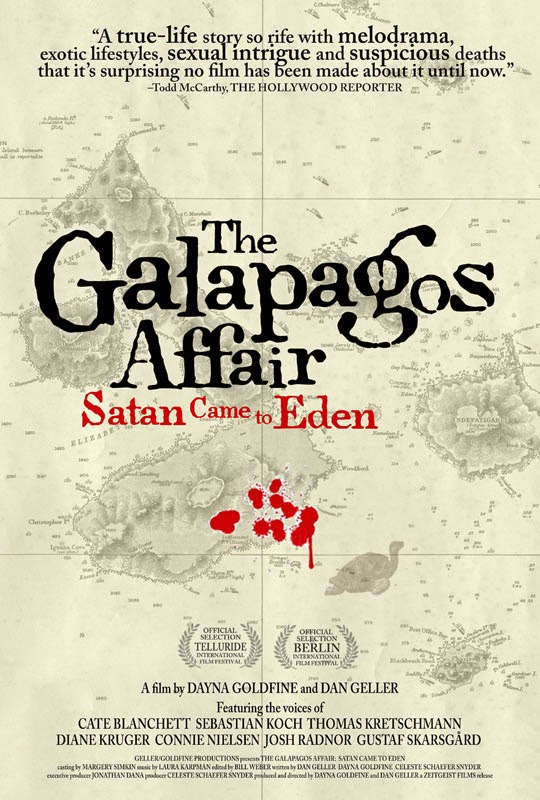 A would-be Nietzschean ubermensch, German Dr. Friedrich Ritter had enough of modern society. So in Septermber of 1929 he and his mistress Dore Stauch took up residence on the uninhabited island of Floreana in the Galapagos Island chain. It would be a difficult life, especially for Dore who suffered from multiple sclerosis, but at least they would be left alone. Or so they thought.

Although their only contact with civilization was a mail boat every 6 months, the couple's letters home were printed in the tabloids, making them into minor celebrities. Their fame in turn influenced a few other hardy souls to see if they could make a go of it on Floreana as well.

The Wittmer family, who were exactly the sort of typical German family the Ritter's disdained, were bad enough. But once the eccentric Baroness Von Wagner and her tag-team lovers Alfred Rudolf Lorenz and Robert Phillipson arrived, claiming they would build a hotel on the island and basically acting as if they owned the whole place, whatever remaining hopes Dr. Ritter and his paramour had for an idyllic life in paradise evaporated. Tensions grew, especially as the Baroness spread lurid tales about what happened on the island to the newspapers. Then in March of 1934 a series of disappearances and deaths rapidly reduced the island's population.

Exactly what happened on Floreana and who might have been responsible remains a mystery. It's a mystery that the documentary THE GALAPAGOS AFFAIR: SATAN CAME TO EDEN makes no pretense of solving. Rather, RASHOMON style, the film recounts the various versions of the story told by the island's inhabitants and other involved parties. While everyone who was there for the events is now dead, they all left behind a great deal of correspondence, and two of the participants wrote books giving their accounts. As an added bonus, there's even a fair amount of film footage of the islanders.

Stylistically the film pretty much follows the Ken Burns playbook. Voice actors (including Cate Blanchett) read letters written by the participants over photos and film footage, alternating with interview footage with their descendants and other present day Galapagos islanders. Nothing flashy, but it's a gripping enough tale of intrigue that it should hold the attention of most true crime and mystery afficianados.

The biggest problem is that co-directors Daniel Geller and Dayna Goldfine bog things down by spending too much time with other Galapagos islanders who have little if any connection the the central mystery. The material is not without interest, but much of it seems irrelevant to the story the film is trying to tell. It would have been better left as a bonus feature for the DVD, or perhaps even used as the beginnings of another film altogether. 3 out of 4 stars.
Posted by Bob Ignizio at 12:00 AM