The Double (July 31st and August 1st at the Cleveland Cinematheque)

[THE DOUBLE screens Thursday July 31st at 7:55 pm and Friday August 1st at 9:15 pm at the Cleveland Cinematheque.] 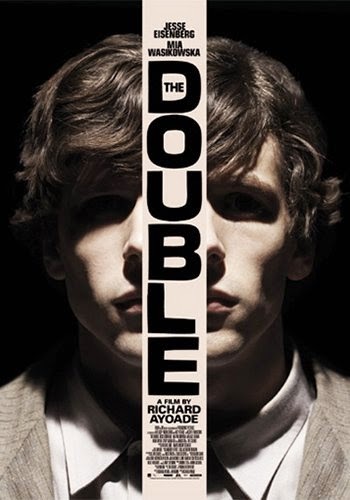 Based on a novella by Dostoyevsky, THE DOUBLE concerns Simon James (Jesse Eisenberg), a low level office worker shy to the point of near invisibility. Simon has a crush on fellow employee Hannah (Mia Wasikowska) but can't bring himself to talk to her, instead watching her with a telescope from his apartment like Jimmy Stewart in REAR WINDOW. While doing so, he sees a man on a ledge across the way wave to him and commit suicide by jumping. Both Simon and Hanna go outside when the police arrive, and this leads to a not-quite-a-date at a nearby diner.

Despite there being some degree of chemistry between himself and Hannah, Simon is unable to pursue the relationship further. At this point Simon's doppelganger appears. James Simon (also Eisenberg) looks the same, but personality-wise is Simon's polar opposite: confident, gregarious, and sexually aggressive. At first the look-alikes are friends, with James seemingly offering to help Simon get ahead. Soon, however, it becomes apparent that James is only using Simon, taking credit for his work and eventually pursuing Hannah romantically. Along with his other problems, this sends Simon spiraling towards a breakdown, fearing that he is fading into nonexistence.

Ostensibly THE DOUBLE is a comedy, but the humor is more bleak than black with what grim chuckles there are coming few and far between. Director/co-writer (with Avi Korine) Richard Ayoade's focus seems mainly on creating the fantasy world his story takes place in, a heavily set designed Kafkaesque dystopia that recalls Terry Gilliam's BRAZIL and Jean-Pierre Jeunet and Marc Caro's DELICATESSEN. Nothing wrong with that sort of thing, but here all that world building does is distance us even further from characters as drab and dreary as the world they inhabit while distracting us with questions about exactly how and why this world works that ultimately prove irrelevant. A more grounded, everyday setting would have served the film better. 2 out of 4 stars.