[THE DANCE OF REALITY screens Friday July 18th at 7:00 pm and Saturday July 19th at 8:30 pm at the Cleveland Cinematheque.] 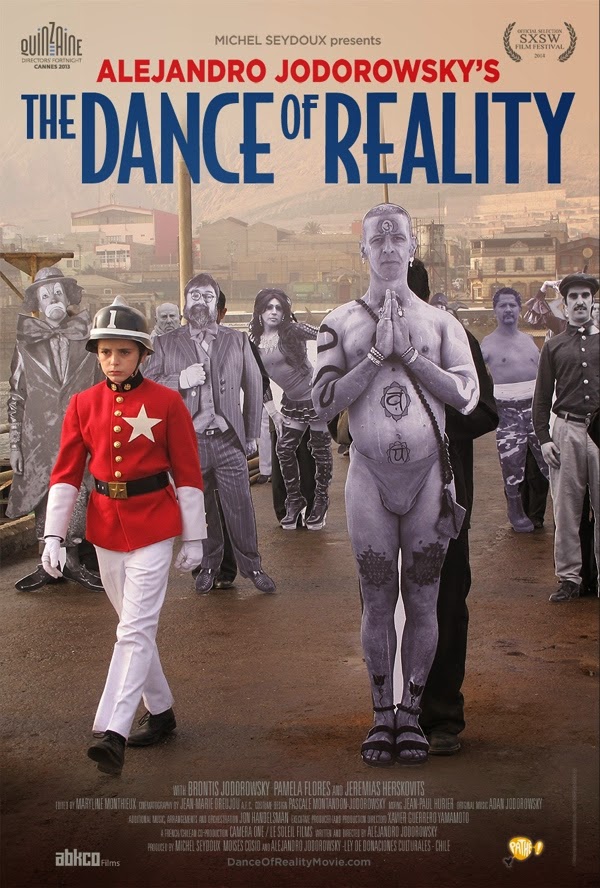 After being absent from theater screens for 23 years, cult filmmaker Alejandro Jodorowsky finally returns with THE DANCE OF REALITY, a vividly colorful surrealist spectacle that is the first film I've seen this year worthy of being called a masterpiece. The title refers to Jodorowsky's idea that each person creates their own reality in a “dance” with their imagination. So while DANCE is ostensibly autobiographical, covering Jodorowsky's childhood in Chile and the evolution of his father from a hyper masculine petty dictator into a more caring and spiritual being, one shouldn't necessarily take it at face value.

As the film begins, young Alejandro (Jeremias Herskovits) is being taught what it means to be a man by his father Jaime (Brontis Jodorowsky, son of the real Alejandro, playing his own grandfather), a former circus performer turned shop owner whose personal idol is Josef Stalin. For starters, he has Alejandro's long blond hair (actually an intentionally obvious wig) cut off. The hair then vanishes into the ether. This greatly upsets Alejandro's mother Sara (Pamela Flores) who voices her displeasure by singing opera, her standard mode of communication. She believed her son to be the reincarnation of her own father, but the haircut somehow undoes this.

The literal truth of this or much of anything else in the film is uncertain and irrelevant. The point is to illustrate the way that Jodorowsky views his childhood and the family relationships that made him who he is in his own unique way. To quote line from a film by another great surrealist director, David Lynch's LOST HIGHWAY, Jodorowsky likes to remember things, “How I remembered them. Not necessarily the way they happened.” The visual motifs he uses to this end – religious symbolism, amputees, deformity, damaged hands, the circus, phallic imagery, voluptuous earth mother figures – should be familiar to any who have seen the director's past work.

Many have compared DANCE to Fellini. Certainly a filmmaker taking a fantastical look back at his formative years calls to mind AMACORD, but beyond that basic premise the similarities end. This is a Jodorowsky film through and through, the style and personal obsessions undeniably his own. In particular, the parallels in Jodorowsky's life as he remembers it and the plot of his best known film EL TOPO are unmistakeable, as Jaime in DANCE goes through a gauntlet almost identical to the one endured by the protagonist of that earlier midnight movie classic.

As surreal and at times confrontational as THE DANCE OF REALITY can get, it is not an inaccessible film by any means. The imagery is stunning and often bizarre, but the meaning of what we see is never difficult to surmise. The message of transformation and redemption is also one that most viewers should be able to relate to and embrace. But really, just the chance to witness this master filmmaker craft a fresh collection of original and indelible imagery is pleasure enough. In an era of film in which so many play it so safe, the 85 year old Jodorowsky reminds us what it's like when a filmmaker throws caution to the wind and follows his inspiration without any thought of box office receipts. 4 out of 4 stars.
Posted by Bob Ignizio at 12:00 AM