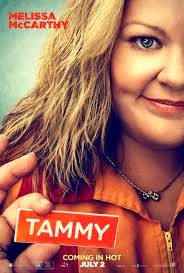 When TAMMY begins, viewers may be convinced that they are in for a stale drama about finding oneself after failure. Tammy (Melissa McCarthy) is in the midst of a crisis; her car has been totaled, she loses her job at a fast food restaurant, and she catches her husband cheating on her with a neighbor. All signs point to a story line that is all too well-known. However, that is not what TAMMY delivers. Co-written by McCarthy herself (and her husband, director Ben Falcone), TAMMY is anything but ordinary. Just like the shining star that is McCarthy, TAMMY is full of relentless and nonstop hilarity.

Shaken by recent events, Tammy decides she wants to leave town. The only problem is that she lacks money and a car. In comes Pearl (Susan Sarandon), Tammy's highly-medicated grandmother. Tammy is skeptical about road tripping with her grandmother, but relents after realizing it's her only way out of town. $4000 and a six-pack of beer in tow, chaos ensues.

McCarthy and Sarandon, while providing solid performances, never seem to reach a natural chemistry on screen. Perhaps this is due to the fact that Sarandon isn't even remotely grandmotherly. Only 24 years McCarthy's senior, Sarandon is simply not fit to be portraying a senior citizen. The wig, the outfit, everything about Pearl seems fabricated.

Despite the lack of credibility surrounding Pearl, McCarthy, as usual, will have audiences in stitches with her fearless and unyielding approach to comedy. Holding back what could be a flawless performance is the constant need to use Tammy's weight and appearance in general as punch lines to jokes. By the end of the film, it becomes quite an annoyance.

Tammy and Pearl's road trip leads them to land in more than a few compromising position, each one providing a handful of laughs. Supplying help along the way are a multitude of supporting performances, including the charming Mark Duplass as Tammy's love interest, Bobby and the extremely funny Kathy Bates and Sandrah Oh as a lesbian couple.

If the goal of TAMMY was to provide endless laughter, then director Ben Falcone succeeds. Despite obvious flaws, TAMMY is a gem of a comedy that shows viewers that McCarthy may be the funniest woman to grace the big screen with her presence. 3 out of 4 stars.