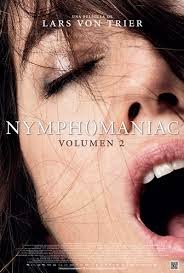 In his review of Lars von Trier’s NYMPHOMANIAC VOLUME 2, New York Times film critic A.O. Scott referred to VOLUME 1 as “the fun part.” Scott was making a joke (at least I think he was), but that snarky bon mot is probably how a lot of viewers will feel after watching the less conventionally enjoyable second half of von Trier’s magnum opus.


There’s as much of a tonal disconnect between VOLUME 1 and VOLUME 2 as there was a stylistic gap separating Quentin Tarantino’s KILL BILL movies. If the first BILL was a dizzying succession of “Can you top this?” action setpieces, the concluding chapter released six months later was slower, talkier and (a half hour) longer. BILL VOLUME 2 was still an enormously accomplished piece of auteurist filmmaking, yet so far removed from its antecedent that many Tarantino fans felt cheated.

It took me a few days after seeing VOLUME 2 to process my complicated and, truth be told, rather deflated reaction to the film. The downward spiral of Joe’s (Charlotte Gainsbourg) sexual odyssey as related to Seligman (Stellan Skarsgard) is as joyless, defiantly unsexy and ultimately depressing as the first half was buoyant and even exhilarating. And the climactic twists (having to do with the identity of the assailant who left an unconscious Joe in the alley at the beginning of VOLUME 1 and the fate of virginal Seligman) are less amusing than disheartening. Like Peggy Lee, we’re left thinking, “Is that all there is?”

Certainly the extended sojourn into sado-masochistic territory via the “Silent Duck” chapter will leave more than a few viewers repulsed and even angry. I for one will never be able to look at Jamie (BILLY ELLIOT) Bell the same way again after his frighteningly convincing turn as K, the sick fuck who serially brutalizes and degrades Joe. The fact that von Trier lingers on Joe’s abuse—with lovingly fetishized close ups of the welts, bruises and blood left by K’s riding crop—almost feels like he’s rubbing our noses in the unpleasantness.

Threatening another toddler with defenestration so soon after 2009’s ANTICHRIST seems less tasteless than merely lazy. And if von Trier really intended NYMPHOMANIAC to be read as a backhanded feminist manifesto (something along the lines of, “She who controls her sexuality controls her destiny”), consider me singularly unconvinced.

There are less purposeful digressions courtesy of Seligman’s erudition in VOLUME 2 (adios fly-fishing metaphors), and I must confess to missing their arch playfulness. Some new tangents work splendidly, however. Joe’s disastrous attempt at joining a sexaholics anonymous therapy group (“I love my cunt and my filthy dirty lust,” she says after getting a bellyful of their 12-step blather) is a rare comic highlight. Her mentoring of an orphaned teen during a stint as a repo woman is as unlikely as it is droll. That subplot also paves a narrative path—perhaps a too convenient one—to the problematic ending.


Von Trier remains one of the most adventurous and challenging filmmakers alive, and anyone who saw NYMPHOMANIAC VOLUME 1 is duty-bound to see VOLUME 2 posthaste. I can’t imagine what someone walking into the second half cold would make of it, though. Or what they could possibly get out of the experience.


Would I have preferred that von Trier had delivered on the promise of the earlier Volume? Absolutely. But half a great movie is better than none, I suppose. 2 1/2 out of 4 stars.