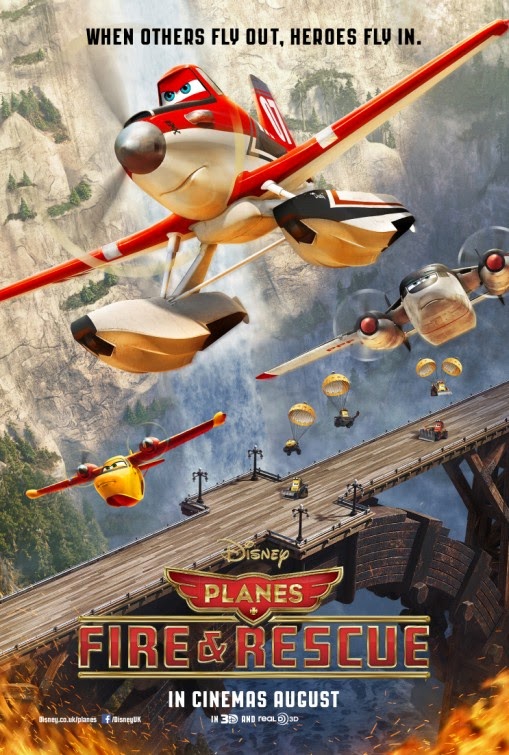 The first PLANES was little more than a watered down version of the same “big race” plotlines used in the CARS films from which it was spun off. It was easily one of the laziest, most worthless animated features to ever get a theatrical release. Thankfully, while it's still no classic worthy of the Disney name, PLANES: FIRE AND RESCUE at least makes an effort to tell an original story, and to flesh out its anthropomorphic aviation vehicles into real characters.

After having transformed from lowly cropduster to world champion race plane in the previous film, Dusty Crophopper (Dane Cook) returns home like a conquering hero. But while practicing for his next big race, Dusty discovers that his gear box is going bad. If he pushes himself to the degree necessary for racing, it could mean his demise.

In a fit of depression upon learning this news, Dusty takes off on a reckless flight and winds up accidentally causing a fire at the airport. Fire truck Mayday (Hal Holbrook) just barely manages to avert disaster, which alerts the authorities to the fact that current fire safety standards are not being met. Not only does Mayday need an upgrade, he needs a partner certified in firefighting as well.

Of course Dusty volunteers for this new position and heads off to learn from a group of firefighting planes at a national park. As is par for the course in these kind of movies, Dusty refuses to follow orders from veteran fire plane Blade Ranger (Ed Harris) at first. He also doesn't let anyone know about his gear box condition, potentially putting himself and others in danger as a result of his pride. A romantic subplot involving star struck fireplane Lil' Dipper (Julie Bowen) aggressively pursuing Dusty helps pad out the story.


The action/disaster movie premise is reasonably fresh for kiddie fare, and when the inevitable big blaze breaks out in the third act it does manage to generate some genuine tension and excitement. Outside of that aspect, though, the film does little to distinguish itself from other kiddie fare. Some of the jokes feel like they were picked up off of the CARS discard pile, and while the voice cast is serviceable, no one gives what could be called a standout performance. Kinda' makes you appreciate Larry the Cable Guy (Mater in the CARS movies) a little more. The kids will still probably like it, and it shouldn't grate on the grown-ups nerves too badly, but despite the improvements PLANES: FIRE AND RESCUE still feels like something that should have gone straight to home video. 2 ½ out of 4 stars.
Posted by Bob Ignizio at 2:46 PM