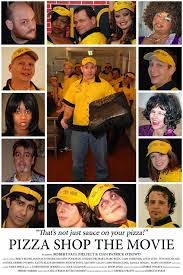 Not long ago, the still-young Kevin Smith announced his retirement from filmmaking, the medium he had entered with such a transgressive splash exactly 20 years ago (sigh) in CLERKS. I suppose I can resolve with a few keystrokes whether Smith is set to keep this vow, or if it's just some hoax or "performance art" (like Joaquin Phoenix's ruse about voluntarily ending his acting career). But I won't check just yet. Don't want my hopes dashed. Bad enough LeBron caved in and will come back to Cleveland.

Why don't I want Kevin Smith to ever shoot a frame again? Some of Mr. Smith's work I quite enjoyed. Some I didn't. Some I don't have plans to watch, ever. But the point is, the singular DIY filmmaker is also a popular speaker, author, and, of course, comic-book entrepreneur and self-described "media whore." So, in my opinion, any way you slice it, Kevin Smith has enough going on upstairs to suggest he's really got better things to do than to go and make more films. I wish him a productive retirement.

The Kevin Smith filmic `tradition,' meanwhile, will be upheld, more or less, by lots of other indies and wannabes with crotch-centric humor and lower-middle-class enthusiasm for human-waste pranks. For instance, Arizona's George O'Barts and his workplace slob-grossout comedy PIZZA SHOP: THE MOVIE.

For a movie that makes CLERKS seem like Whit Stillman, that trades on product-contamination jokes and is bookended by excrement gags, I found PIZZA SHOP more watchable than I thought I would. Which begs the question of how hideously unwatchable I really expected it to be.

Locale is, yes, a suburban pizza shop, where Jason (Cian Patrick O'Dowd) is the alpha member of the delivery team, even if he  gleefully mixes his own dung into the sauce for a particularly despised customer. Imagine Vince Vaughn in a $125 million remake of PIZZA SHOP (worse things have happened, like TRANSFORMERS sequels) and you've got a handle on the Jason character.

But another employee is Pete (Robert Bielfelt), an arrow-straight, upbeat type, whose perpetually sunny attitude and good customer service rouses Jason's intense dislike. After Jason and his allies at work pull a sadistic practical joke on Pete, it's no more mister nice guy, as Pete and Jason declare a one-day delivery duel, to determine which one can make the most on tips. The loser will have to go.

On that framework hangs a mixed topping of gags, mostly about sex and personal hygiene. Jay and Silent Bob would probably give thumbs-up to PIZZA SHOP, and I would guess that the Kevin Smith business/art model provided O'Barts with no shortage of lowbrow inspiration. The fact that the twists and turns of the Pete-Jason relationship had me interested at all was something of a coup.

Or maybe I was just fascinated by the fact that the customer everyone hates, into whose pizza sauce they all spit or shit, is played by an actor (credited as a certain  Louie Leto) who really, really does look like Joe Mantegna fallen on lean times. Please somebody look into the matter and confirm for me it's not really the David Mamet actor. How about you, Kevin Smith? You should have plenty of time right now. At least I hope he does. (1 1/4 out of 4 stars)

For more info on the film and how to get a copy, click here.