Manakamana (July 24th and 25th at the Cleveland Cinematheque) 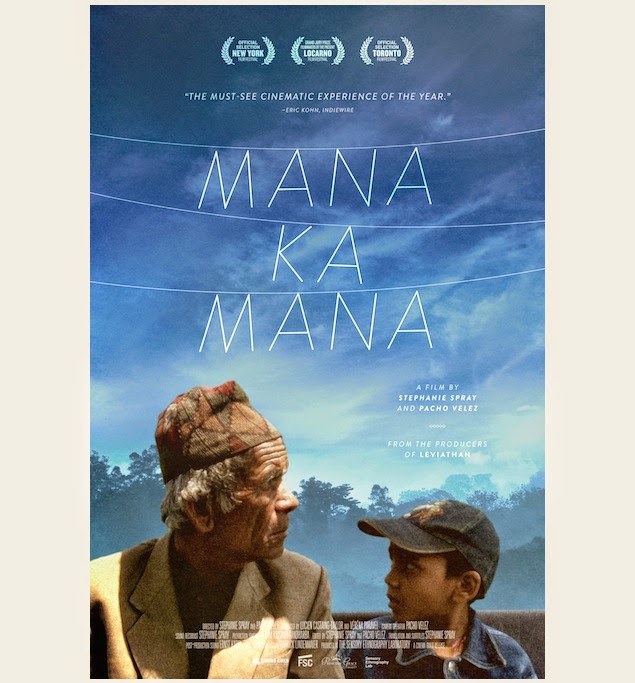 Is “Manakamana” a gallery installation or a movie?

For the first hour or so I kept asking myself that question. By the time it was over, I realized it was both. And, furthermore, that it really didn’t matter.

Co-directed by Stephanie Spray and Pacho Velez, MANAKAMANA is pretty much the definition of “ambient cinema.” Consisting of 11 unbroken (i.e., there aren’t any edits and the camera remains securely tethered to a tripod built by the filmmakers for the duration of the shoot) sequences of passengers riding a cable car to the titular Nepal temple, the film is one of the most unique and unforgettable in recent memory. (Try saying that about EARTH TO ECHO.)

It’s nearly impossible to read anything into the largely impassive faces of the first two voyagers, an old man and what appears to be his grandson. When someone finally speaks—a woman tells her husband that her ears have popped due to the high altitude—it’s vaguely disconcerting, as if a spell were somehow broken.

As the movie progresses, however, any talk feels like a balm. For starters, you never know what any of the passengers are going to say. In that regard, it’s nearly as suspenseful as a Hitchcock thriller where you’re breathlessly waiting for a hidden bomb to explode.

“Manakamana” is also priceless as a study in human nature.

Three gossipy old ladies discuss their “husband.” (Are there Hindu Mormons?) Two young women (one of whom is clearly from North America), both with flowers in their hair, seem to be doing their best to pretend they’re alone in the car. Only when they begin speaking do we realize they’re actually friends—they even share a water bottle. Watching them try and navigate their own inner space inside such cramped quarters is deeply fascinating.

Three hipster-ish looking young (male) musicians look as if they stepped right out of Brooklyn. From their nonsensical chatter, they also appear to be stoned.

A constant refrain in almost every conversation is the dramatic natural backdrop of a sal forest. Perhaps it was just my imagination, but the color of the trees actually seemed to brighten, even intensify as the film progresses.

It’s riveting in a way that another recent study in inaction (J.C. Chandor’s ALL IS LOST) wasn’t. And Chandor had a movie star (Robert Redford) at his disposal.

MANAKAMANA is formally audacious due to its breathtaking simplicity and the painstaking rigor of the execution. (Spray and Velez never cheat: the camera remains stationary throughout and there are no discernible cuts.) At times, I was reminded of some of Abbas Kiarostami’s more radically formalist works and even the ‘70s movies of Marguerite Duras.

Mesmerizing, meditative and ultimately hypnotic, even the stray moments of tedium are rewarding because they allow you to contemplate the pleasurable sensation of watching people interact (or not).

Also uncanny is how, days after seeing the film, I somehow remembered each of the passengers. In their relatively brief moments of screen time (the segments last about ten minutes apiece, and only one husband and wife couple makes a return visit), they all manage to leave an indelible impression. 3 1/2 out of 4 stars.