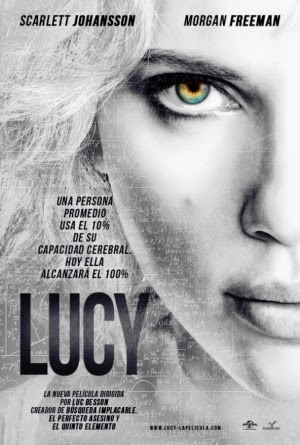 A seemingly ordinary young woman named Lucy (Scarlett Johansson) is forced by drug dealer Mr. Jang (Min-sik Choi) to deliver a new designer drug insider her abdominal cavity in LUCY, the latest stylish thriller from writer/director Luc Besson. The package breaks open inside of our protagonist when one of the thugs she is delivering it to roughs her up. This gives Lucy a megadose of the drug that unlocks heightened intelligence, heightened senses, and even super powers.

With her new-found abilities and the help of French police officer Pierre (Amr Waked), Lucy tracks down three other drug mules. She needs their stash to literally keep herself together until she can figure out how to pass along all the profound knowledge now residing in her head to brain expert Professor Norman (Morgan Freeman).

The starting point for this plot is the utterly false notion that human beings use only 10 percent of their brains. Contrary to what LUCY would have us believe, we use the whole thing. Some humans may use their brains better than others, some may be born with more or less raw intelligence, but there are no vast expanses of unmapped and untapped cortex as Freeman, the closest thing the movies have to the voice of God, asserts early on in the film. (If you don't believe me, read this article in Scientific American and do some Google searching of your own for further corroboration.)

Now, being a fan of horror, science fiction, and fantasy, I've certainly given a pass to all kinds of ridiculous nonsense in any number of films. The problem with LUCY is that Besson seems to genuinely believe this psuedo-scientific claptrap and feels it is of the utmost importance to share the (mis)information with his audience. So at least every 10 minutes, he blatantly reminds us of his central premise either with a line of dialogue or by flashing on the screen just what percentage of her brain Lucy is currently using. The way Besson keeps belaboring this faulty premise pulled me completely out of the movie.


The film isn't a total wash. Aside from the expected well-staged fight scenes, most involving some form of psychic or telekinetic ability that Lucy has just unlocked, Besson also comes up with some clever bits of visual storytelling, like intercutting a pre-super powered Lucy trying to escape the bad guys with shots of a cheetah stalking and catching its prey. There's not a whole lot of call for nuanced performances here, but the cast all have sufficient presence to keep us interested in their one dimensional characters more than they deserve. So even though the premise grated on me, I did get some enjoyment out of LUCY. If only I could have found a way to  only use ten percent of my brain while watching it, I might have stopped caring about the idiocy of the premise and enjoyed it even more. 2 ½ out of 4 stars.