[LIFE ITSELF is now playing in Cleveland at the Cedar Lee Theatre and in Akron at the Nightlight Cinema.] 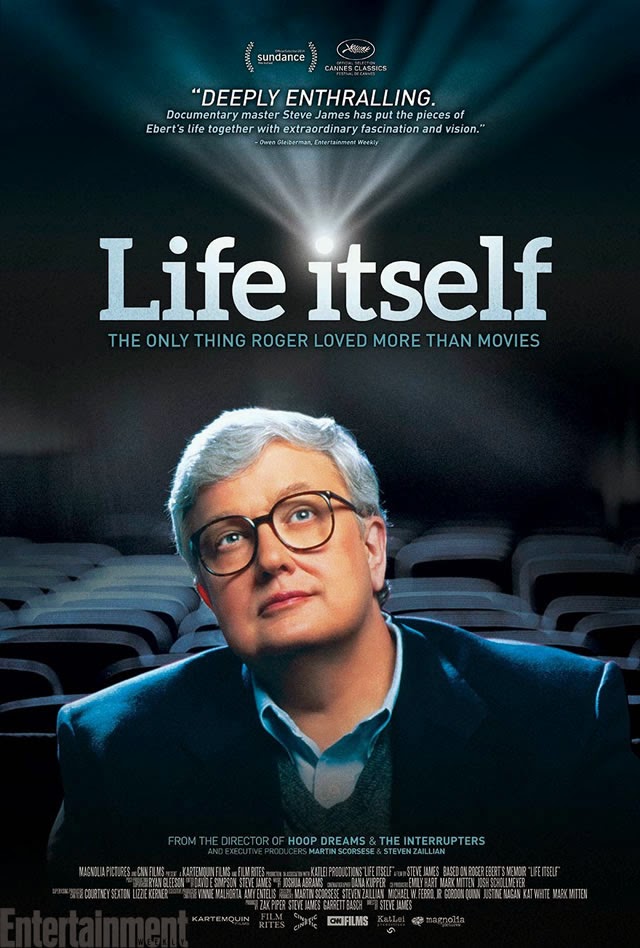 “I was born inside the movie of my life,” said Roger Ebert, the popular movie critic who died in 2013 at age 70. In his memoir, written while he was battling terminal cancer, he wrote, “This is the third act. And it has been an experience.”

Steve James' documentary, LIFE ITSELF, based on Ebert's memoir of the same title, gets inside that experience. His camera finds Ebert in fighting good humor and sharp mind, despite frequent hospitalizations and having lost the ability to speak, eat or drink. The exceptionally well made film is both a thorough biography of the world's most famous movie critic and a humane, very moving essay on life, work, love and mortality.

James, whose documentary film Hoop Dreams Ebert had championed, was given intimate access to Ebert and his exceptional wife, Chaz, in the final five months of Ebert's life. Ebert fully participated in the making of the documentary, answering in detail all of James' thoughtful questions. Anyone who was among Ebert's 800,000 Twitter and Facebook followers knows that the critic's last years were an enormously productive period. He wrote numerous books on subjects as wide-ranging as cooking and rambles through London, reviewed movies, opined about politics, and chronicled his illness. “He has an inner core of steel,” says wife Chaz. James asks Ebert, via email, how he keeps his spirits up. Ebert replies, “I zeroed in on my work. When I am writing, I'm the same person I always was.”

He loved to write, almost from his first day to his last, and was a fast, facile writer of prose that was clear, plain and accessible, if not especially stylish. The film vividly recounts Ebert's childhood and early career, first as the wunkderkind editor of the Daily Illini, the University of Illinois' student paper, where the portly, bespectacled 21-year-old earned attention for his passionate editorial condemning the Birmingham church bombing in 1963.

Ebert was brashly confident, not surprising for an only child whose doting parents literally applauded whenever he learned a new word. A former colleague describes Ebert as “egotistical, a showboat,” a trait in full flower when he became a reporter for the Chicago Sun-Times and held court nightly with fellow ink-stained guzzlers at a pub called O'Rourke's. Ebert's braggadocio, as well as the disreputable women he kept company with, were legendary, as was his drinking before he gave up the bottle for good in 1979.

At the time Ebert was offered the critic post at the Chicago Sun-Times in 1967, film criticism was such a casual affair that the paper affixed a floating byline, “Mae Tinee,” (for “matinee”) to movie reviews written by whoever. Ebert wistfully recalls that 1967 “was a good time to be a movie critic.” It was the year of THE GRADUATE and BONNIE AND CLYDE, which he praised as “astonishingly beautiful” and asserted that it was “about us.” (The clips of BONNIE AND CLYDEsuggest that Arthur Penn's slick, ersatz style has not dated well.)

Ebert's story also includes a foray into screenwriting, after he hooked up with the notorious Russ Meyer, maker of wild B movies whose signature feature is big-breasted women, apparently another (two) of young Ebert's interests. Ebert was tapped to write the screenplay for Meyer's infamous farrago BEYOND THE VALLEY OF THE DOLLS, a dubious achievement about which he was never the least embarrassed. In LIFE ITSELF, Martin Scorsese, a friend of Ebert's since the day Ebert predicted he would be “the American Fellini,” tries to find something charitable to say about the Meyer film. “I liked when [the woman] has sex in the Bentley,” he offers. (Scorsese is an executive producer of this documentary.)

James skillfully weaves together Ebert's past and present, not shying away from showing some of the more painful elements of Ebert's medical struggles the alarming look of his face without his lower jaw, his occasional frustrations with his condition, Chaz's loving strength, weariness, sadness and fear. Ebert was honest and open about his condition, appearing on magazine covers with his altered face and speaking with great equanimity about his impending death. “I'm not afraid to die,” he wrote. “We all die.”

Ebert won the Pulitzer Prize and became enormously famous as one half of Siskel and Ebert, the TV movie-critic duo that made “thumbs up” and “thumbs down” part of the critical parlance, for better or worse. At age 50, he fell in love with and married Chaz, a divorced African-American woman who became his salvation. “She saved me from the fate of living out my life alone,” he says, and the film shows Ebert as a loving stepfather and step-grandfather, enjoying life and travel with his family. When Ebert became ill, Chaz promised if he fought on, she would make his life as interesting and active as possible, a promise she valiantly kept.

Ebert's successful marriage is one of two love stories in this film; the other is his antagonistic connection with Gene Siskel, who is described as “ his opposite in every way.” Siskel was a cool, smooth Yale philosophy major, a friend of Hugh Hefner, a contented family man, and the sophisticate Ebert always wanted to be. Already fierce rivals as critics at competing dailies, their symbiotic pairing for the TV show was “radioactive.” Clips from the show remind us of how entertaining their battles were (“You're just wrong!”). They traded sarcastic insults on camera – even over something as inconsequential as BENJI THE HUNTED – and off camera barely spoke. Acrimonious outtakes from their promos show that their enmity was not an act.

The film argues that in the end, the squabbling duo really loved each other. Certainly they needed each other. Siskel lived in constant fear that the more famous Ebert, especially after winning the Pulitzer, would quit the show. Siskel also kept his terminal brain cancer a secret for fear that he would be dropped from the lucrative gig. His death at age 53 hit Ebert hard; he determined he would never keep his own condition a secret as Gene did.

Although the film is admiring of Ebert, it doesn't evade questions about the quality of his criticism. The New York Times obituary for Ebert was headlined, “A Critic for the Common Man,” and Ebert's Times acolyte A.O. Scott headlined his Ebert tribute, "Critic Whose Sting Was Salved by His Caring.” Ebert's populism was both his strength and downfall. His reviews are not known for penetrating insight or soaring language, and the Siskel and Ebert TV reviews ushered in an era of reviews valued less as writing than as consumer advice. (I remember having to rate movies I reviewed for a newspaper by using dollar signs – “$$$$” meant it was “worth the ticket price.”)

Ebert was eulogized as a writer who showed that criticism was not the exclusive province of intellectuals, and that everyone's opinion mattered. John Simon, the brilliantly erudite and often acerbic critic, rejected this idea, disdaining “the whole thumbs up, thumbs down critique Ebert practiced, inherited from the Roman emperors who thus granted clemency or death at the gladiatorial contests. In Ebert's case, the thumb was mightier than the word: wouldn't such a shortcut take precedence over whatever verbiage followed it?” (For his part, Ebert wrote of Simon, "I feel repugnance for the critic John Simon, who made it a specialty to attack the way actors look. They can't help how they look, any more than John Simon can help looking like a rat.”) I actually agree with Simon that an actor's looks are relevant, especially in the film medium, but that's an argument for another day.

The film also touches on the issues raised by Ebert's close friendships with film directors, some well known and some more obscure, whose careers he helped to advance. He was not one of those critics who prefer to keep at a distance from the creators of the work he critiques, and was not apologetic about it.

James has accomplished something fine in this film, which is not a gushing tribute but a balanced portrait of the man, the outsized cultural figure he became, and the fulfillment, through love, of his search for meaning. 4 out of 4 stars.

Posted by Pamela Zoslov at 9:11 AM