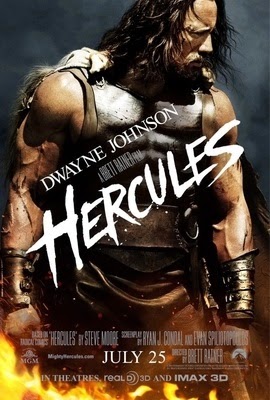 You’ve got to check your brain at the box office when it comes to seeing historical actioners and period pieces at the cinema.  The rule is even more applicable when anteing up for films whose narratives draw from source material where the facts were sketchy to begin with, like gladiator movies and Bible-based epics.

That’s why we don’t balk when the Nazis and Israelites (or aliens from other galaxies) in summer blockbusters speak Americanized English.  It’s a dispensation we afford moviemakers because we want to be sucked into the action as quickly, without the encumbrance of subtitles.

Hercules is the Roman name for Greek hero Heracles, the brawny demigod sired by Jupiter and born unto a mortal woman.  But modern books and movies typically refer to the legendary strongman by his Roman handle, which—if the writers are consistent—makes his Olympian papa Zeus.

That’s how it is with HERCULES, the latest big-screen adaptation of the muscular mythology.  Hercules (Dwayne Johnson) is a Roman expat whose mastery of English falls between that of a Shakespearean actor in teenage theatre troupe and a drive-in cashier at the local McDonald’s.  An opening montage establishes that he’s already completed most of the Twelve Labors assigned him by Hera to atone for Zeus’ infidelity:  He’s killed the Lernaean Hydra, slain the Eurmanthian Boar, and cleaned the Augean stables in a single day.  We see Hercules grapple with the Nemean Lion, whose hide becomes the muscleman’s hoodie.

The adventures made Herc famous, but he’s banished from Athens after his wife and kids turn up dead.  Now just another sword-for-hire in the wilderness, he works for gold, flexing his prodigious arms by day, haunted by his family’s murder by night.

Despite his impressive CV, Hercules remains unconvinced of his divine nature—but he’s content to let his reputation precede him when it comes to his dirty work.  And he’s surrounded by a cadre of ragtag companions whose skills bolster his status in the eyes of the people:  The knife-throwing Autolycus (Rufus Sewell) is his brother-in-arms; sexy, athletic Atlanta (Ingrid Bolso-Berthal) is a gifted archer from the Amazon; loyal-but-mute Tydeus (Askel Hennie) is a war orphan adopted by Hercules years ago.

There’s also Amphiraus, a scar-faced seer whose predictions (and false visions) provide some very funny moments.  Portrayed by the versatile Ian McShane (Blackbeard from the last installment of THE PIRATES OF THE CARIBBEAN), the wizard is about as reliable as a TV weatherman when it comes to forecasting the future, but he’s a trusted friend and mentor to Hercules and the others—like a weird uncle.  Herc’s nephew Iolaus (Reece Ritchie) tags along as resident bard, but the youngster hopes to one day stop telling other people’s stories and start living his own.  Overprotective Hercules won’t have it.

We’re introduced to the stealthy misfits and marvel at their talents when they infiltrate a campsite full of pirates early on.  Herc’s mercs toast their success in a pub the following day, but gold doesn’t bring the big guy any solace.  Instead, he contemplates retirement:

But the ruffians are called to battle once more when the lovely Ergenia (Rebecca Ferguson) makes a misty-eyed appeal:  Her father, Lord Cotys of Thrace (John Hurt), needs Hercules to help rid his kingdom of the villainous Rhesus (Tobiasl Santelann) and his marauders.  Seems Rhesus has been looting and plundering one town after another, and Cotys—who’s taken on more refugees than he can handle—fears his neighborhood is next.

Moved by Ergenia’s plea (and looks), Hercules relents.  We suspect he wants to clear his conscience; he can’t recall killing his kids, and he’s plagued by recurring nightmares of Cerebus, the fabled three-headed wolf, and dealing with the demon-dog is his final, unfinished Labor.

Hercules becomes combat coach to thousands of reluctant Thracian farmers.  He tells Cotys he needs more time to ready the army, but the aging lord is eager to neutralize Rhesus’ threat.  When the fledgling army is ambushed on a search-and-rescue mission at a nearby village, only Hercules and his aides can save the soldiers’ skins.  Amphiarus’ vision of the lion (Hercules) crossing paths with the crow (symbol of the Thracian army) in a City of the Dead comes to pass.

But something doesn’t quite add up.  Ergenia grows increasingly concerned, even after Hercules confronts Rhesus and his horde of “centaurs.”  She worries for her boy, who stands to inherit Cotys’ crown, unawares that King Eurystheus (Joseph Fiennes) has been making plans to prevent that from ever happening.  Hercules and his friends are paid and dismissed for delivering Rhesus, but their hearts are heavy.

The son of Zeus may be in for more than he bargained for.

Does Hercules live up to his legend?  Is he truly a familicidal felon, or a savior-in-waiting?  Can he conquer Cerebus, clear his name, and find his destiny?

Credit director Brett Ratner (X-MEN: THE LAST STAND, RUSH HOUR trilogy) and his screenwriters for incorporating Hercules’ bloody backstory in the first place.  Released earlier this year, Renny Harlin’s horrid THE LEGEND OF HERCULES shied away from that part of the mythology, instead transforming the titular titan (Kellan Lutz) into an unsympathetic, lovelorn prodigal son with a pretty face.  Ratner’s version draws heavily from the popular Radical Comics title HERCULES: THE THRACIAN WARS by the late Steve Moore, and very effectively reimagines our bicep-laden lug as a haunted hero searching for redemption.

The picture is heavy on themes of perception and belief.  Early on, someone tells Hercules that it doesn’t matter whether he acknowledges Zeus as his father, because the people—having heard the fantastical stories—already revere him as such.  Later, when his friends need him most, Hercules suffers a crisis of faith that forces him to reconcile his heavenly heritage and unleash his inner awesome.  Johnson—the former wrestling champ and college football star formerly known as “The Rock”—is no Olivier—but at least when he defiantly shouts “I am Hercules!” we get excited.  We believe he believes it, and we revel when his Hercules takes revenge on his oppressors, where with Lutz’s medieval metrosexual we just laughed.

HERCULES has lots of action of the swords-and-sandals variety and earns its PG-13 rating with chaotic battle sequences and fistfights.  The recent HOBBIT and HUNGER GAMES films have acclimated youngsters to mild bow-and-arrow bloodshed, but the images of corpses and severed heads and children in peril may disturb kids under ten.

Johnson (bearded and longhaired) does as much as he can with the lead role, given the shallowness of script.  He’s a charismatic guy on and off-screen, which—apart from his bulldozer physique—is sufficient here for Ratner’s purposes and ours.  In that way, Johnson inhabits the character in much the same way as Arnold Schwarzenegger owned CONAN THE BARBARIAN thirty years ago.  Rather than be thrown from a horse, Johnson’s Hercules throws horses.  For passable escapist Saturday afternoon entertainment—which this is—that’ll do.  That Johnson shows any credible emotional range at all (which he does, in a couple teary-eyed turning points) is like extra protein powder in the cupcake.

My ten-year old son—already a full-blown “Rock” fan—loved it.
We had trouble keeping up with some of the names, which can be a chore with the gladiator genre:  “This one is Isosceles, and that one is his twin brothers are Primus and Prius.  Herpes is the valiant warrior who will rescue Princess Amygdala on his mighty steed!”  We know going in that we won’t encounter anyone named Chris, Mark, or Jennifer.  But Hercules’ friends (and enemies) are fairly archetypal (The Sidekick, The Archer, The Sorceror / Seer, etc.) so we’re able to sort out who’s who soon enough. 2 ½ out of 4 stars.
Posted by Peter M. Roche at 2:04 PM