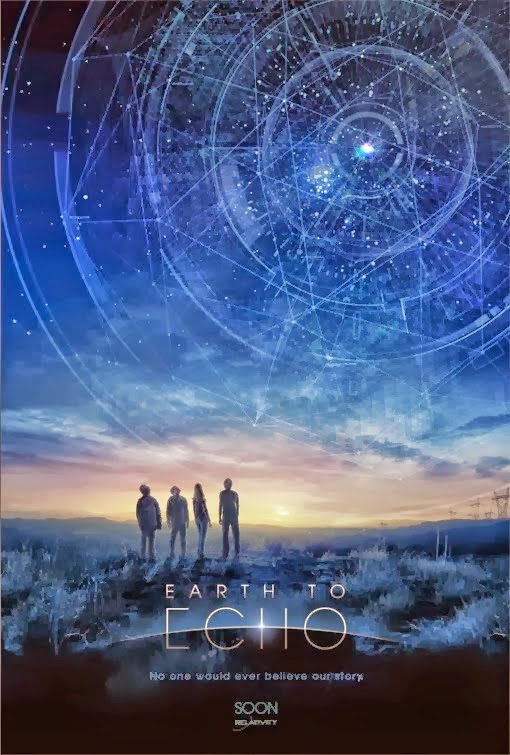 A Nevada suburb has been taken over by imminent domain, ostensibly for a new highway. Sure, it's a pain in the ass for the adult homeowners, but for their kids it's practically the end of the world. That's especially the case for a close-knit trio of adolescents – Tuck (Brian “Astro” Bradley), Alex (Teo Halm), and “Munch” (Reese Hartwig). To varying degrees they all feel powerless and invisible, but they're also the only ones to notice that the strange interference they've been getting on their cell phones is actually a map to a location in a nearby dessert.

So on the night before they have to move, the kids lie to their parents about staying over at each other's houses, hop on their bikes, and head out looking for adventure. They find it in the form of a tiny, damaged robot they name Echo. Although Echo can't talk, the kids figure out they can communicate in the time honored fashion of “once for yes, twice for no”. Soon, they're helping the little guy track down the missing parts he needs to repair himself, inadvertently causing minor havoc along the way. They also pick up a fourth member of the group, Emma (Ella Wahlestedt) who is even more alien to the young boys than Echo. The group also attracts the attention of the supposed highway construction crew who are, in reality, some unspecified group of authorities bent on capturing the alien for their own less than benevolent ends.

So yeah, it's basically an eighties Spielberg production in contemporary faux documentary clothing, E.T. THE EXTRATERRESTRIAL crossed with CHRONICLE. The emphasis on repetitious searching for pieces parts leading to inevitable property damage over characterization and showing how and why these kids would bond with the little robot (other than he's cute) makes for a film with considerably less emotional resonance than Spielberg's classic, but for younger audiences that probably won't make too much of a difference.

The faux documentary approach has reached the point where it barely warrants notice. It's just another way of telling a story, and that's fine. That said, it doesn't feel like the approach adds much to this particular story, nor does it ever feel particularly convincing. Nonetheless, EARTH TO ECHO is a reasonably enjoyable 90 minutes, especially for its intended audience of kids and adolescents. They're not going to care that it's a second rate E.T. knock-off. Hell, some of them probably haven't even seen E.T. And hey, I'm always for any movie that teaches kids you can't always trust authority, and sometimes you have to break the rules to do the right thing. 2 ½ out of 4 stars.
Posted by Bob Ignizio at 12:00 AM