Dope Island: So, has the Fiend seen any GAY MOVIES LATELY?

Plus, I wrote blurbs for the Cleveland International Film Festival, meaning I had to watch all their many, many gay movies (and such rare lesbian ones as could have their act together and get us screening copies in time). Plus I researched a massive, unpublished book on documentary film, which meant lots of LGBT content nonfiction features. Plus...God just wants to punish me, or something (religion always does seem to come up in discussions of gayness). Point is, I seem to end up assigned to experience an inordinate amount of gay movies. Really gay movies. Gay movies so gay they'd get gay-bashed by other gays. Movies so gay that straight people could have made them (a great line I borrowed from infrequent Cleveland Movie Blog contributor Chip Karpus). Don't think my personal life hasn't suffered just as much as my professional life.

Cleveland of 2014 has the honor of hosting this summer's Gay Games, in early August (I wonder if I should take credit; imagine the selection committee, going over all the desperate, rust-belt cities vying to the Gay Games and all that gay money, said, "Oh, Cleveland! That's near where Charles Cassady lives, that guy who watches all those gay movies! We'll go there!"). Rainbow flags and emblems have proliferated, and when Clevelanders say "I'm a friend of Dorothy," for once they don't mean Fuldheim.

So in this heavily gay climate, noblesse oblige I get into the spirit as best I can and update you all with the most gay of the recent gay movies I have had to watch. SPOILER ALERT: Following material contains homosexual references. 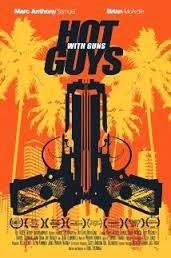 First is HOT GUYS WITH GUNS, a slick, semi-comedic, LA-based, bi-racial, gay film-noir - except its not very noir, when you get down to it. Must be an interior-decorating thing.

Writer-director Doug Spearman has a lot of balls (metaphorical and literal) to juggle in the air with this sort-of-thriller, whose high point, the cynical might say, is a cool CGI-animated opening-credits in mock tribute to the trendsetting graphics Maurice Binder did for the 007 pictures. The tongue-in-cheek plot has table-waiting actor Danny (Marc Anthony Samuel) doggedly researching a potential breakthrough role in a popular TV cop-show franchise (Law & Order-inspired, I'd guess). Thus, Danny takes adult-ed courses in private-investigator tactics from an old-timer gumshoe (Darryl Stephens).

Danny's "homework" in DIY crime-busting leads him back to an on-again/off-again boyfriend, promiscuous white rich kid Patrick (Brian McCardle), whose social circle of elite movie-industry homosexuals (there's a line about "the gays who secretly run Hollywood" or something like that; I think it's a joke...I think; this was all before the Bryan Singer lawsuit hit the headlines) has recently been victimized by bizarre burglaries. It seems all participants at sex- and fetish-parties are narcotized and robbed while unconscious and nude. Butt shots only, at least in the cut I had to watch.

Catty banter and observations about La-La Land lifestyles are actually more entertaining than the detective stuff (the body count is astronomically low). Performances by a generally unknown cast are uniformly good, and I got a kick out of the unsung Darryl Stephens especially - or maybe I just identified personally with the token aging straight guy who can't quite believe he's landed in this milieu. Sex scenes aren't graphic, but bare male backsides, torsos and revealing leather outfits are about as commonplace and eye-candy-ish as cleavage was for Pam Anderson vehicles of yesteryear.

Perhaps the most noteworthy achievement of HOT GUYS WITH GUNS, besides a sub-theme (rather standard for the gay-movie genre) of monogamy and male-on-male true-love vs. just shagging around, is that the material seldom stoops to outright camp, the stereotypical touchstone of gay humor. And that credit sequence is absolutely fabulous.

Okay, you want more nudity, and real shagging around, and abnormal gynecology? You've got it and more in MR. ANGEL, a documentary by John Hunt. 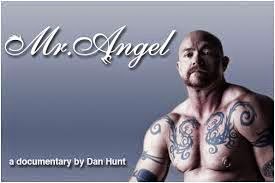 Yet Angel was born female, and found jobs as a blonde glamour model, going into a tailspin of drugs and self-destructiveness before deciding to change her sex.

Despite identification as a man, male-hormone treatments, breast-removal surgery, and, ultimately, marriage to a born-female woman, Angel chose to keep `his' vagina, which he uses extensively in his cinematic copulations. In the international marketplace, Angel is unique, catering to fantasy-fetishes nobody even knew existed. Well, perhaps I did, but only because I HAVE TO WATCH ALL THESE DAMN GAY MOVIES!!!
One may or may not buy into the premise that Angel is a heroic "sex educator," bearing a message of transgender acceptance, and he even speaks at Yale University. But, despite the now-standard visit to the Adult Video News annual porno expo in Las Vegas (I think every documentarian now finds an excuse to film at the AVN Awards, with the possible exception of David Attenborough and the Disney Nature people), MR. ANGEL generally does not come across as a tabloid-sideshow (he-he, I wrote "come").

Hunt does explore some heavy emotional baggage, as the sympathetic Angel describes wrestling with sexuality, addiction and suicide attempts, and long estrangement from his straitlaced family - especially a father still struggling to accept all this.

One thing about MR. ANGEL that stood out for me (hey, you think it's easy writing about gay movies all the time without lapsing into unintended double-entendres, you give it a try. You cocky pricks) is the revelation that Angel dwells now in Mexico with body-piercing-specialist wife Elayne, and they claim to be among the alarmed Americans who actually did flee clean out of the USA because of the election of George W. Bush.

So those are the two gayest movies that I have had to watch lately. Though there may be more down the line. Yes, I will accept your sympathy and pity, all I can get.

In the meanwhile, have a nice Gay Games, Cleveland. No, I don't think I'll be attending in any form. Why bother? I'll probably have to watch the movie version down the line anyhow.
Posted by Charles Cassady Jr. at 9:41 AM