Birth of the Living Dead (now on video) 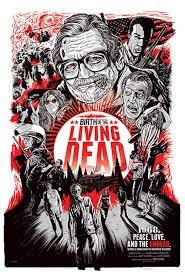 At one point in the documentary BIRTH OF THE LIVING DEAD, George Romero, director of the seminal 1968 horror film NIGHT OF THE LIVING DEAD, makes a point of telling BIRTH director Rob Kuhns that he didn't “make” his film by himself. No one makes a movie alone; it's a collaborative effort, and as Romero points out, even this documentary wouldn't be possible without the efforts of its crew.

Unfortunately, Kuhns seems to miss the point as none of the other cast and crew members of NIGHT get to relate their stories of making the classic horror flick. Romero does a pretty good job of telling how the film came to be and seems to go out of his way to give credit where it's due, but it goes without saying that some of the other people involved would have seen things from a different and equally relevant perspective. Given the short running time of BIRTH, and the fact that most of those involved still seem more than happy to talk about their experiences making NIGHT at horror conventions and in other forums, it's hard to understand why Kuhns didn't talk to any of the other surviving participants.

At least when it comes to covering the critical response and social impact of NIGHT OF THE LIVING DEAD, BIRTH doesn't just trot out the usual horror documentary suspects (John Landis, Joe Bob Briggs, whoever is editing Fangoria at the moment, etc.). Instead we hear from modern indie horror filmmaker Larry Fessenden, respected film critic Elvis Mitchell, and a teacher who uses the film to teach his inner city grade school class (why couldn't I have had this guy at my school?), among others. Not that their insights are necessarily better than more typical horror doc talking heads, but neither are they any less insightful, and their comments don't sound like they've been honed in 20 other documentaries about horror films.

In the end, I suppose BIRTH OF THE LIVING DEAD would be a pleasant enough diversion for those new to the film, and there's arguably a small amount of interest to the more knowledgeable fan. If you really want to delve into the making of the film, though, I suggest you spring for the Elite Entertainment DVD from a few years back. Between the commentaries and other bonus features, you'll learn a lot more about how the film was made and the personalities involved. It's still available from several online sources – just be careful as there are multiple other companies whose versions of the film aren't as good and lack the bonus features. 2 out of 4 stars.
Posted by Bob Ignizio at 12:00 AM