Ballin' at the Graveyard (July 23rd at the Cedar Lee Theatre - One Show Only!)

[BALLIN' AT THE GRAVEYARD screens Wednesday July 23rd at 7:30 pm at the Cedar Lee Theatre.] 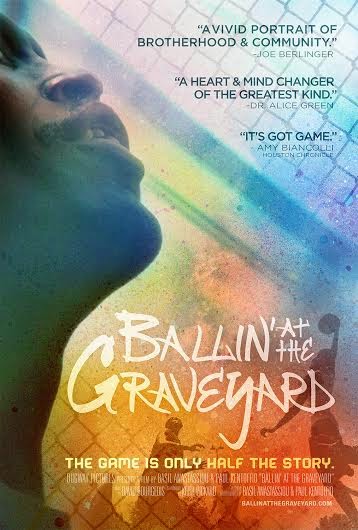 There's a lot more to a game of pick-up basketball than meets the eye. That's the thesis behind BALLIN' AT THE GRAVEYARD, a new documentary that introduces us to a group of mostly middle aged, mostly black men who get together to shoot hoops at Washington Park located in Albany, NY, aka “The Graveyard”. These guys may have left their hoop dreams far behind, but that doesn't mean they don't play hard. And trash talk, bluffing, and cheating are all accepted parts of the game. Because when you're older, you have to use what you've got. And don't expect to just show up at the park and get a game with these guys; you have to prove yourself first. Everyone is on even footing at the Graveyard regardless of their race, occupation, or background; all that matters is how good they can play.

The first half of the film lets us see what these guys are like on the court and get a fair sense of their personalities and individual playing styles. It also serves to show the psychosocial elements of these pick-up games, and how those are as important if not moreso than who wins or loses. The second half of the film digs deeper, focusing in on five of the regular players to show us who they are off the court.

The five players chosen cover a wide range of histories, family situations, and professions. One actually had a shot at playing pro ball, another is a novelist. The one thing they all have in common is a desire to help the next generation excel by sharing their own experiences and knowledge. Sometimes that involves basketball, but not always.

If there's any issue with BALLIN' AT THE GRAVEYARD, it's the sudden shift between these two parts of the film. Each is interesting, and certainly the parts are interrelated, but it just feels a bit jarring to jump from one to the other. Still, it's a relatively minor quibble in an otherwise engrossing film. And no, you don't have to care about basketball to enjoy the movie – I know I certainly don't. That's because at its core, BALLIN AT THE GRAVEYARD is a movie that, like many of my favorite documentaries, shows us how a particular subculture is unique while at the same time being very much understandable as part of the human condition. 3 out of 4 stars.